Pitt recently implemented a quick and easy way to access electronic resources when you are off campus. The new system is called EZproxy. Using EZproxy means that you’ll no longer have to log in via Pitt’s Secure Remote Access service.

In order for EZproxy to work correctly, you must set your browser to allow cookies.

UPMC users should continue to access HSLS e-resources through Connect@UPMC when off the UPMC Network.

During the past months, we’ve been renovating Falk Library’s upper floor. There’s been a lot of dust and discomfort, as we’ve torn down walls, re-painted and re-carpeted. We appreciate your patience as our facilities have been updated to meet the needs of students and faculty in the 21st century.

So what’s different? The most notable change is that there is no longer a Computer and Media Center (CMC). Our computers aren’t confined behind walls and doors; instead, you’ll see them scattered throughout the library. The classroom has been moved, and will now accommodate up to 24 students. When a class is not in session, the classroom is open to individual users who want to use the computers. END_OF_DOCUMENT_TOKEN_TO_BE_REPLACED

Part 1 of this article appeared in the August issue of the HSLS Update, and gave an overview of the freely available Micromedex 2.0 Drug Information App. Part 2 reviews the Micromedex Drug Interactions and IV Compatibility apps. Both apps are available to Pitt and UPMC users through the HSLS subscription to the full Micromedex 2.0 site.

The Micromedex Drug Interactions app provides information on the potentially harmful interactions of medications, including the probability, potential timeframe, and severity of an interaction, as well as adverse effects, and more.

Both apps are available for Apple and Android devices and can be downloaded from the iTunes App Store or Google Play Store.

Each downloaded app requires a unique password. These passwords are available to Pitt and UPMC users by following these instructions:

NOTE: Your password is confidential and must not be shared with anyone.

After initially entering the app password, you will not be required to do so again. But you will occasionally be asked to update the password. Once the current password nears expiration, the app will remind you to enter a new one. At that time, return to mobileMicromedex by using the instructions above and obtain the new password. 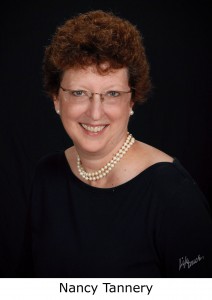 Nancy Tannery, HSLS senior associate director, was recently appointed to the National Library of Medicine’s Literature Selection Technical Review Committee (LSTRC) for a four year term. The purpose of this committee is to review journals for inclusion in MEDLINE, the world’s premier database of biomedical journal literature. The committee consists of approximately 14 members who meet three times a year. Only two members of the committee are librarians. Other members are selected based on their scientific expertise and experience.

According to Tannery, in order for a publisher or editor to have a journal considered for review by LSTRC, they must first complete the MEDLINE Review Application. The committee then evaluates the journal by considering a number of items, including the scope and coverage of the journal, its editorial board, the quality and types of content, its geographic coverage, and the overall quality of the journal. Approximately 140 journal titles are reviewed at each meeting, and 20–25 percent of these are selected for indexing.

At her first meeting in late June, Tannery did not officially participate, but observed the meeting’s format. The meetings are formal and members follow parliamentary procedures. Tannery will actively take part in the next meeting which is scheduled for October 25–26. She’s looking forward to working with committee members, each of whom brings a different background to the group. She also anticipates learning a great deal about biomedical publishing.

HSLS Octoberfest  is a new series of workshops that provide an informal way to learn more about finding and using information important to your work. Each Tuesday in October a different topic will be explored, including searching for grant resources, next generation literature searching, resources and strategies for publishing an article, and more. The workshops will be held in Falk Library, Conference Room B, from noon–1 p.m. For more information, please see the HSLS Octoberfest Workshop schedule, contact the HSLS Main Desk at 412-648-8866, or e-mail Ask a Librarian.

In addition, a section called “What’s new in psychiatry” highlights additions to UpToDate from the last six months that are considered of special importance to the profession. Examples of these topics include first-generation antipsychotic medications; pharmacology, administration and comparative side effects; cocaine abuse and dependence in adults; depression in adolescence; guidelines for prescribing clozapine in schizophrenia; and more.

For authoritative information on psychiatric topics from agoraphobia to unipolar major depression with psychotic features, or on subjects in between, try the new content in UpToDate. For questions about using UpToDate, contact the Falk Library Main Desk at 412-648-8866 or e-mail Ask a Librarian.

PubMed Central, the free digital repository of biomedical and life sciences journals from the National Library of Medicine, has been updated with a new name, PMC, and a new look. This new look is a “cleaner and more uniform presentation across PMC’s site as well as its article, issue and journal archive pages.”

Other enhanced features include:

Searching for History of Medicine Articles in PubMed Is Now Easier

You can locate this filter on the left side of the PubMed search page by clicking on “more” under Subjects. 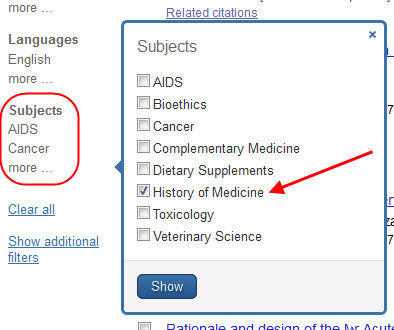 Or, you can click on Topic-Specific Queries on the front page of PubMed, scroll down the page, and then click on the History of Medicine link. 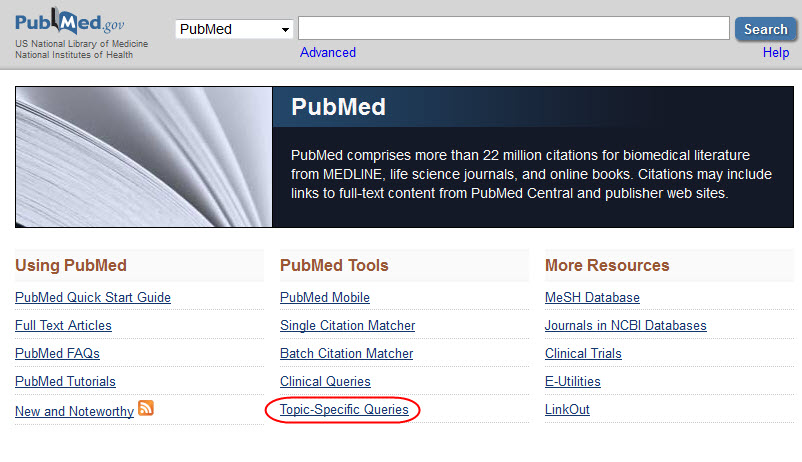 *Parts of this article were reprinted from “What’s New in PMC: Another Facelift” and “Retrieving History of Medicine Citations in MEDLINE/PubMed,”  NLM Technical Bulletin, July-August 2012.

A summary of this year’s Emergency Preparedness Poll from Adelphi University’s Center for Health Innovation indicates that 48 percent of U.S. adults lack emergency supplies, 55 percent believe that local authorities will help them in their time of need, and only 18 percent report receiving information on healthcare preparedness from the media. This provides an excellent opportunity for healthcare and information professionals to become involved and advance their knowledge of emergency and disaster health information resources.

A good place to start is with the Medical Library Association (MLA) and National Library of Medicine’s (NLM) Disaster Information Specialization Program and the National Network of Libraries of Medicine, Middle Atlantic Region’s (NN/LM MAR) in-person and online training and awareness workshops.

MLA and NLM have developed a continuing education program in disaster and emergency preparedness. There are five courses required for the basic certificate with additional courses being offered for an advanced certificate. Barb Folb, HSLS public health informationist and reference librarian, teaches one of the advanced courses, Ethical and Legal Aspects of Disaster Response. Courses are offered in a classroom setting or online at no cost. Eligibility is open to librarians and library staff at all types of libraries, as well as those affiliated with the disaster workforce.

Acquiring the Disaster Information Specialist certificate will demonstrate that you have the knowledge and skills necessary to support your institution or organization, educate your patients and their families, and empower the community in the event of a disaster or public health emergency.

The 2009 Report to the President and Congress from the Federal Coordinating Council for Comparative Effectiveness Research states that “recent government legislation and revised definitions of comparative effectiveness research (CER) put a spotlight on the information resources available to support CER and patient-centered outcomes research efforts.” As a result, the National Library of Medicine (NLM), other government agencies, and many academic centers have developed tutorials and tools to locate primary literature and datasets to support CER, as well as resources to identify CER technical reports and reviews for consumers. 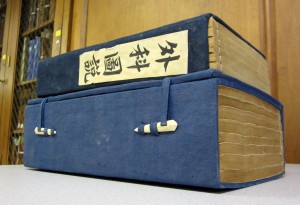 Most of the hidden treasures in the Falk Library collection were contributed by donors. One of these generous people was Lieutenant Colonel J.A. Mendelson, a World War I veteran, who was a member of the United States Military Mission to China, and at one time an assistant professor of Military Science and Tactics at the University of Pittsburgh. During his years in China, Burma, and India, he collected interesting objects related to the cultures of the countries where he served. Many of the swords, daggers, and knives from his collection are housed in the Smithsonian Institute. He also brought home early Chinese medical texts that he gave to Pitt’s School of Medicine’s library during the summers of 1943 and 1944. 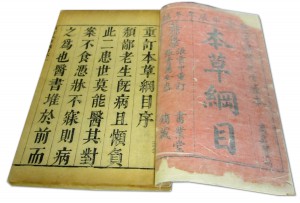 These early Chinese books are now housed in Falk Library’s Rare Book Room. The collection includes rare books by Chen Shigong (1617), Dou Hanqing (1717), Li Shizhen (1784), and two 19th century texts by Gao Wenjin (1856) and Chen Huichou (1878) covering the subjects of surgery, blood circulation, blood vessels, Chinese herbal medicine, and acupuncture. One outstanding title is Bencao Gangmu (本草綱目), also known as the Compendium of Materia Medica, written during the Ming Dynasty. This 18th century reprint from the original 1590 edition is regarded as the most complete and comprehensive medical book ever written on the history of traditional Chinese medicine. It lists all of the plants, animals, minerals, and other items that were believed to have medicinal properties. The oldest book in the group, Xin kan Wai ke zheng zong (外科正宗), published in 1617, is a compendium on external diseases in traditional Chinese medicine. According to the Chinese Rare Book Catalog (中國古籍善本書目), there are only four known copies of the book in China. WorldCat, the global catalog of library collections, shows two copies in the United States.

All of the books are illustrated. They are also examples of traditional woodblock printing. This method was developed in China for printing on silk, rather than paper, and better suited for Chinese character set than movable type. The books are thread-bound, a predominant binding format in traditional Chinese books, and are enclosed in a cloth-covered case which is enforced with wooden boards, and closes with loops and pegs.

The books can be viewed in the Rare Book Room by appointment.

We gratefully acknowledge the help of Zhang Haihui, Chinese Studies Librarian at the University Library System’s East Asian Library, for her guidance and assistance in cataloging these rare Chinese books.