What is a preprint database?

Why create a preprints search tool?

BrowZine provides an easy way to browse and read thousands of scholarly journals from publishers such as JAMA Network, Nature, American Psychological Association, BMJ Publications, PLoS, Biomed Central, and many more. Pitt users can access BrowZine on their Web browser or through the easy-to-use mobile app.

BrowZine’s “My Bookshelf” feature makes staying up-to-date easy. You simply select your favorite journals and then click on Add to My Bookshelf. New article notifications are sent automatically, and you always get the full text, whether you are onsite or working remotely.

END_OF_DOCUMENT_TOKEN_TO_BE_REPLACED

UPMC physician and author Steven L. Orebaugh donated a copy of his fiction book, “A Night in the Life,” to the HSLS Leisure Reading Collection. This gritty, fast-paced book is based on his real life experiences working in the emergency department of a community hospital located in Pittsburgh.

The Leisure Reading Collection is located at the rear of the main floor of Falk Library in the comfortable seating area.

HSLS is proud of books authored or edited by Pitt health sciences faculty and UPMC clinicians, especially when we can make those books available in our collections. END_OF_DOCUMENT_TOKEN_TO_BE_REPLACED 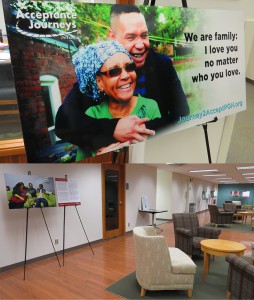 Falk Library is currently hosting a special exhibit entitled, “Acceptance Journeys Pittsburgh: Addressing LGBT stigma through science, the humanities, and social marketing.” The Graduate School of Public Health developed the exhibit in conjunction with the Provost’s Year of Humanities. The posters for this exhibit are designed with public health messages relating to stigma and feature local Pittsburghers. As an interactive exhibit, visitors can leave their reactions through written notes or recorded audio.

The exhibit is displayed on the upper floor of Falk Library in the study lounge through March 10, 2016.

Confronting Violence: Improving Women’s Lives, an online exhibit by the National Library of Medicine, explores the role of nurse activists in creating awareness of domestic violence as a medical, nursing, and public health issue. Narrative and digital images depict the history of the anti-domestic violence movement in the United States, early research published by nurses on this topic, and materials used to create awareness of domestic violence and provide referral information to victims of abuse. A digital gallery allows viewers to watch videos created during the 1980’s and 1990’s to instruct physicians and nurses in techniques for screening, intervention, and referral for domestic abuse. The education section of the exhibit contains extensive teaching materials suitable for undergraduate and graduate-level courses, as well as lesson plans for students in grades seven through twelve.

Almost as interesting as the exhibit itself is its backstory. The National Library of Medicine typically creates exhibitions to showcase materials already in the library’s collections. However, when initially approached about creating an exhibit on domestic violence, NLM determined that it had an inadequate number of resources on this topic. A three-year collaborative effort between NLM, nurses who played critical early roles in the anti-domestic violence movement, and Johns Hopkins Medical Institution, led to the creation of a manuscript collection that now resides in NLM’s History of Medicine Division. That collection, “representing a significant national movement within the medical profession” (NLM in Focus, Oct 29 2015), serves as the basis of the current exhibit.

Author name in bold is HSLS-affiliated

Classes are held on the first floor of Falk Library (200 Scaife Hall) in Classroom 1 and on the upper floor of the library in Classroom 2. All classes are open to faculty, staff, and students of the schools of the health sciences at the University of Pittsburgh, who will need a valid Pitt ID or e-mail account. They are also open to UPMC residents and fellows, who will need to show their UPMC IDs. END_OF_DOCUMENT_TOKEN_TO_BE_REPLACED