As previously reported, HSLS hosted a National Center for Biotechnology Information (NCBI) Hackathon from September 25-27, 2017, in collaboration with numerous campus partners. The event took place in the Digital Scholarship Commons of the University Library System (ULS). HSLS, the Center for Research Computing (CRC), and the Department of Biomedical Informatics (DBMI) generously provided support for breakfasts. Computing Services and Systems Development (CSSD), the School of Computing and Information (SCI), and the CRC provided expert technical support.

An NCBI-style Hackathon is a social event in which highly motivated individuals with expertise in scientific disciplines, computer programming, software development, etc., meet for an intense few days to formulate useful, efficient pipelines supporting biomedical research. All code generated by NCBI-Hackathons is made freely available on GitHub, and manuscripts describing the design/usage of software tools are posted on the F1000Research Hackathons channel.

The Pitt/NCBI-Hackathon was led by Ben Busby, the NCBI Genomics Outreach Coordinator. Participants were primarily from Pittsburgh, but they also traveled from Columbus, Oh.; Baltimore, Md.; Charlottesville, Va.; New York, N.Y.; Denver, Colo.; and San Diego, Calif. Initially, the 24 hackers were divided into five teams, but two of the groups working on virus discovery and identification of past viral exposure merged to form a super-group—an NCBI-Hackathon first! 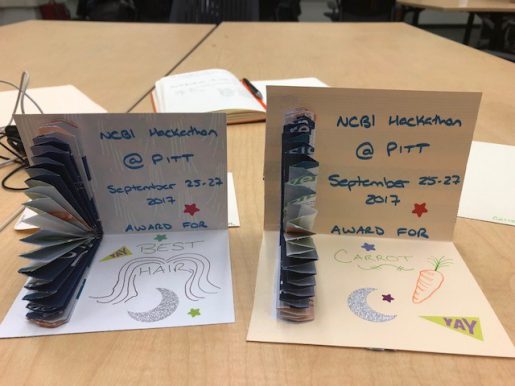 The groups worked for three long, collaborative, and productive days, capped with irreverent awards such as “best hair” and “how I learned to relax and love the hackathon” (see picture). Final projects included:

The success of the Pitt/NCBI-Hackathon bodes well for the possibility of future hackathons. If you are interested in learning more, please contact the HSLS Molecular Biology Information Service.

Users of PubMed and other databases provided by the National Center for Biotechnology Information (NCBI) can save searches, citations, interface preferences, and other information in a MyNCBI account. When MyNCBI debuted there was only one option, to create a new username and password from scratch. NCBI calls this a “native account.” Now MyNCBI is connected to other NIH systems such as the eRA Commons and the SciENcv research biosketch service, and the options for logging into MyNCBI have expanded to include 3rd party logins tied to the user’s Google, eRA Commons, ORCID, University of Pittsburgh, or other accounts. Is there an advantage to creating a new account in MyNCBI? Why not use the University of Pittsburgh 3rd party login and eliminate one more password you must remember?

To register for a new native MyNCBI account, go to the NCBI login page and fill out the registration form. Once the account is created, link it to your 3rd party accounts. To do this, log in to your account and click on your username at the top right of the page. Here you can add linked accounts, and make other modifications such as changing the e-mail associated with your account.

If you have relied on a 3rd party login and lost access to it, e-mail the NCBI help desk. Include the account name and the e-mail address associated with the account in your message. For more information on using MyNCBI, see the NCBI Help Manual.

When students graduate or when employees leave the university, they lose access to the valuable electronic resources available through HSLS subscriptions. That’s where the National Network of Libraries of Medicine (NNLM) can help. Although we cannot provide access to subscription-based information resources, we provide training on numerous other resources from the National Library of Medicine and other trusted sources.

For example, Clinical eCompanion was created by librarians at HSLS and is now maintained by the NNLM Middle Atlantic Region (MAR). Designed especially for primary care clinicians, Clinical eCompanion searches the following evidence-based information resources, all of which are freely available: END_OF_DOCUMENT_TOKEN_TO_BE_REPLACED

Antonio Scarpa (1752-1832) was an Italian anatomist, excellent surgeon, polished writer, and medical illustrator. During his tenure at the University of Pavia, it became the leading educational institution in Europe for the study of anatomy. Scarpa pioneered a program of anatomical demonstrations and required students to learn by practicing dissections on their own. As Rector, he was more the dictator of the University than its leader. His ruthless demeanor earned him no friends. He was feared by students and colleagues alike. There are many stories illustrating this behavior: for example, when he was working on illustrations for his Tabulae Neurologicae, he locked his engraver in the room until the work was finished. When he died, nasty verse defaced his statue in Pavia:

And I should care.

Since he did not leave a family, his assistant performed his dissection and preserved the professor’s head as a specimen for the University. It is still on display today at the Museo per la Storia dell’Università di Pavia. 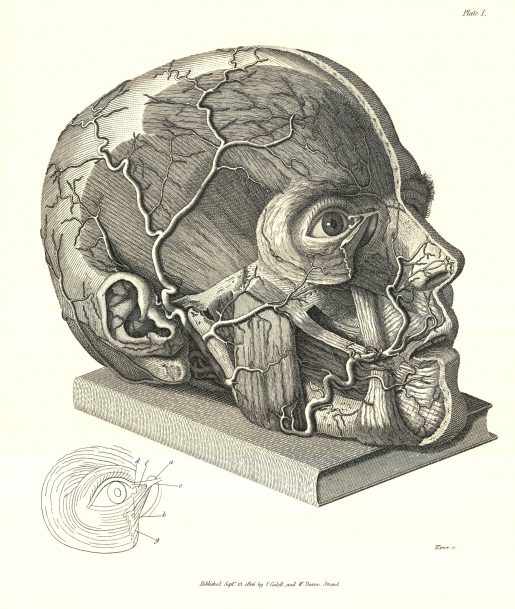 Although he was not a loveable person, his innovative teaching methods, and the excellent books he authored, earned him the respect of the medical profession. He is remembered as a great surgeon, anatomist, and discoverer of the naso-palatine nerve. His study of the hearing and olfactory organs is considered classic. He was the first to correctly delineate the nerves of the heart. In his authoritative works on hernia, he described perineal hernia from direct observations, thus settling any earlier controversy of its existence. His work, Saggio di osservazioni e d’esperienze sulle principali malattie degli occhi (Practical observations on the principal diseases of the eyes, 1806), raised ophthalmology to the level of an autonomous science. Plate I from this work is one of the most famous illustrations in medicine, in which science and art become one.

Falk Library has a facsimile of the ophthalmology book and all Scarpa’s original works on hernias including the English, French, and German translations. These materials can be viewed in the Rare Book Room by appointment.

A new website called, A Method for Introducing Competency Genomics (MINC), from the National Human Genome Research Institute, provides an excellent starting point for nurses who want to integrate genomics into their practice. MINC offers resources for providers with varying levels of experience.

From the MINC home page, there are three convenient ways to get started:

Also included are video testimonials from health administrators and educators describing how they overcame barriers as they developed the necessary genomics knowledge to offer personalized care to their patients.

Erin Seger joined NNLM MAR as the Health Professions Coordinator on September 18. Erin received a Master of Public Health degree from the University of Illinois and has a Bachelor of Science degree in Community Health Education. She has been a Certified Health Education Specialist since 2009. Most recently, she was a health educator embedded in the health learning center at Northwestern Medical Center. END_OF_DOCUMENT_TOKEN_TO_BE_REPLACED

Classes are held on the first floor of Falk Library (200 Scaife Hall) in Classroom 1 and on the upper floor of the library in Classroom 2. All classes are open to faculty, staff, and students of the University of Pittsburgh. They are also open to UPMC residents and fellows, who will need to show their UPMC IDs.
END_OF_DOCUMENT_TOKEN_TO_BE_REPLACED