HSLS recently purchased a collection of nearly 60 new e-books in a variety of health sciences disciplines and specialties. The new e-books are available on the Ovid platform and include:

This is part of our ongoing effort to expand our e-book collection. END_OF_DOCUMENT_TOKEN_TO_BE_REPLACED

Shakespeare adopted his ideas about humorism, or humoralism, from the ancient Greek and Roman philosophers and physicians, Aristotle, Hippocrates, and Galen. It was thought that the body consisted of four humors or fluids: blood, black bile, yellow bile, and phlegm, and that the equilibrium of the body and mind was determined by a balance in these substances. When humors were in balance, a person was healthy, but an imbalance in one of these fluids not only negatively affected the person’s physical health, but also their personality and psychological wellbeing.

Shakespeare, based on the humors theory, presented his Elizabethan audiences with plays depicting the full range of human behaviors and character types, such as the vengeful Shylock in The Merchant of Venice, the melancholy Ophelia in Hamlet, and the unruly Katharine in Taming of the Shrew.

Several books on the topic are held at Pitt libraries and specifically in the HSLS History of Medicine and Rare Books collections.

Now through November 8, HSLS is hosting the traveling exhibit, “And There’s the Humor of It”: Shakespeare and the Four Humors, produced by the National Library of Medicine (NLM) and coordinated by the American Library Association. The exhibit uses materials from the historical collections of NLM to explore the prevailing belief of the four bodily humors.

“About the Elizabethan Era and the Four Humors,” Nuvvo, accessed September 12, 2014, http://shakespeare.nuvvo.com/lesson/4423-about-the-elizabethan-era-and-the-four-humors The National Library of Medicine (NLM) has launched a fascinating online display, Pictures of Nursing: The Zwerdling Postcard Collection. Based on an exhibition currently open to the public in NLM’s History of Medicine Reading Room, the online version is a digital gallery of over 500 postcards collected by Michael Zwerdling, RN. The postcards, produced between 1893 and 2011, depict nurses and the nursing profession through photographs, cartoons, reproductions of posters, advertisements, and other materials. As noted in an Introduction to the online collection, “These images of nurses and nursing are informed by cultural values, ideas about women, men, and work; and by attitudes toward class, race and national differences. By documenting the relationship of nursing to significant forces in 20th-century life, such as war and disease, these postcards reveal how nursing was seen during these times.” The digital postcards explore five themes. “Picturing a Woman’s Mission: Service to Humanity” displays images of nurses as classical and Christian archetypes, including healer, angel, or warrior. “Picturing Nursing as a Career” reflects the rise of nursing as a profession, allowing women a new path to economic independence, opportunities for travel, and meaningful community work. “Picturing the Gender of Nursing” contains postcards promoting the popular stereotype of men as physicians and women as nurses or hand maidens, as well as postcards that challenge this stereotype with group photos of male nurses dating back to as early as 1908. “Nursing and Respectability” examines the influence of race and class on social definitions of the “ideal” nurse, and includes rare postcard images of African-American nurses. Finally, “The Art of Nursing” reflects popular culture depictions of nurses, ranging from sentimental images to the nurse as a sex symbol. This section also contains images used by the nursing profession to counteract such gendered and sexist imagery.

In addition to the digital images, the online exhibit, Picture of Nursing: The Zwerdling Postcard Collection, contains educational materials, including lesson plans for grades 9-10, learning modules for undergraduate students, and a list of additional resources and readings.

*Parts of this article were reprinted from The Zwerdling Postcard Collection: Pictures of Nursing Web site.

The HSLS Molecular Biology Information Service (MBIS) is pleased to announce two sets of hands-on bioinformatics sessions this fall: CLC Genomics Workbench on October 7 and 8, and UCSC Genome Browser on December 4 and 5.

Click on any e-resource link from the HSLS Web site. A pop-up box will appear (see the image below). Enter your Pitt Computer Account username and password and you’ll be taken directly to the resource. You do not need to log in again for the rest of your session as long as you stay within the same browser.

In order for EZproxy to work correctly, you must set your browser to allow cookies.

During this Halloween season—when the undead walk—your greatest weapon just might be current biomedical information. So, in the spirit of the season, HSLS is offering a ghoulish twist on our basic, weekly, Painless PubMed search class. In one horror-filled hour, Undead PubMed will use creepy examples to introduce or update you on: accessing PubMed from a safe location, building an effective search strategy, retrieving full-text articles if the library has been overrun by zombies, using a MyNCBI account to save your searches, and (maybe) save the world.

All of these classes are held in Falk Library, Classroom 1.

The School of Information Sciences’ Partners Program is a scholarship program that offers opportunities for students enrolled in the MLIS program to gain practical library experience. This year HSLS is hosting Francesca Yates.

Yates received her BA in Spanish, with minors in psychology and linguistics, at the State University of New York at New Paltz. When she was 10 years old, END_OF_DOCUMENT_TOKEN_TO_BE_REPLACED 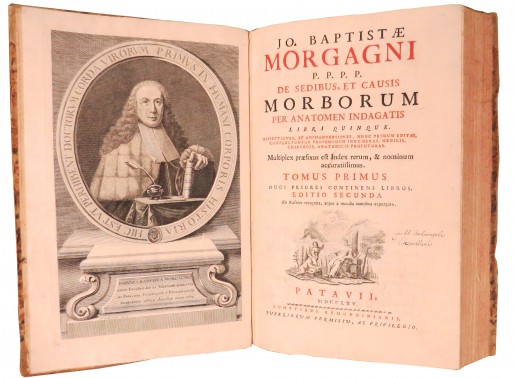 Giovanni Battista Morgagni (1682-1771) was an Italian anatomist and professor of practical medicine at University of Padua. His reputation as an accurate anatomist was established early. He published his first book on anatomy when he was only 19 years old. His seminal work, De sedibus et causis morborum per anatomen indagatis (Seats and Causes of Disease Investigated by Means of Anatomy), was published in Venice in 1761, when he was almost 80 years old. The work included his lifelong experience and discoveries, and earned him the title “father of anatomical pathology.”

The publication of De sedibus ended the theory of humors developed by Hippocrates and Galen, which in Morgagni’s time identified the causes of disease as the disequilibrium between the four humors (blood, phlegm, yellow, and black bile). It was the author who introduced the concept that diagnosis, prognosis, and treatment of disease must be based on an exact understanding of the pathologic changes in the anatomic structures. Morgagni was the first to link the postmortem discoveries with the clinical findings. His work is a systematic collection of pathological cases. It includes those reported in existing literature and those gathered and described from the autopsies he witnessed or performed. All are presented as a logical correlation between the symptoms and anatomical findings.

Falk Library has the second edition of this monumental work (Padua 1765), as well as the first English translation published in London in 1769. The Latin edition was acquired for the collection in 1970. It is a beautifully preserved folio pictured above. The book has fine woodcut head and tailpieces in each volume and includes an engraved portrait of Morgagni by Jean Renard. It can be viewed in the Rare Book Room by appointment.

Julia Dahm, technology services librarian, was elected as a representative to the University of Pittsburgh’s Faculty Assembly for a three-year term. Dahm was also interviewed about 3D printing for the University Times article, “3-D Printing Gets More Attention on Pitt Campus,” August 28, 2014.

Josh Paltrineri has joined the Falk Library staff as a Main Desk Assistant. He holds a BS degree in business administration from the University of Pittsburgh.

Hannah Sinemus has joined HSLS as a library specialist at the Technology Help Desk. Sinemus previously worked at the University of Pittsburgh Barco Law Library.

Classes are held on the first floor of Falk Library (200 Scaife Hall) in Classroom 1 and on the upper floor of the library in Classroom 2. All classes are open to faculty, staff, and students of the schools of the health sciences at the University of Pittsburgh, who will need a valid Pitt ID or e-mail account. They are also open to UPMC residents and fellows, who will need to show their UPMC IDs.

No registration is required, except where noted. Classes marked with an asterisk (*) qualify for American Medical Association Category 2 continuing education credit.