HSLS is pleased to announce that the Falk Library printing system is now a part of the Pitt network. This means that all the benefits of printing at the University computer labs are now available in the convenient location of Falk Library.

The Self-Service Printing option allows students and faculty to:

If you have any questions about printing at Falk Library, please stop by the Technology Help Desk or call 412-648-9109.

Do you have publications that are non-compliant with the NIH Public Access Policy? Did you know that the National Center for Biotechnology Information (NCBI) and the National Library of Medicine (NLM) have resources that will quickly and easily lead you through the compliance process? The most important of these is My Bibliography, which is now the one and only place to record publications resulting from NIH grants. My Bibliography is also a compliance management tool.

Researchers at the University of Pittsburgh Graduate School of Public Health have collected and digitized all weekly surveillance reports for reportable diseases in the United States going back more than 125 years. The digitized dataset is dubbed Project Tycho™, for 16th century Danish nobleman Brahe, whose meticulous astronomical observations enabled Johannes Kepler to derive the laws of planetary motion.

“Brahe’s data were essential to Kepler’s discovery of the laws of planetary motion,” said senior author Donald S. Burke, MD, Pitt Public Health dean and UPMC-Jonas Salk Chair of Global Health. “Similarly, we hope that our Project Tycho™ disease database will help spur new, life-saving research on patterns of epidemic infectious disease and the effects of vaccines. Open access to disease surveillance records should be standard practice, and we are working to establish this as the norm worldwide.”

The easily searchable database is free and publicly available on the Project Tycho™ Web site. Supported by the Bill & Melinda Gates Foundation and the National Institutes of Health (NIH), the project’s goal is to aid scientists and public health officials in the eradication of deadly and devastating diseases.

The researchers obtained all weekly notifiable disease surveillance tables published between 1888 and 2013—approximately 6,500 tables—in various historical reports, including the U.S. Centers for Disease Control and Prevention’s Morbidity and Mortality Weekly Report. These tables were available only in paper format or as PDF scans in online repositories that could not be read by computers and had to be hand-entered. With an estimated 200 million keystrokes, the data—including death counts, reporting locations, time periods and diseases—were digitized. A total of 56 diseases were reported for at least some period of time during the 125-year time span, with no single disease reported continuously.

“Historical records are a precious yet undervalued resource. As Danish philosopher Soren Kierkegaard said, we live forward but understand backward,” explained Dr. Burke. “By ‘rescuing’ these historical disease data and combining them into a single, open-access, computable system, we now can better understand the devastating impact of epidemic diseases, and the remarkable value of vaccines in preventing illness and death.”

*Parts of this article were reprinted from Pitt Unlocks Trove of Public Health Data to Help Fight Deadly Contagious Diseases, Pitt Public Health, In the News, 11/27/2013.

The First Consult App provides access to evidence-based medical information at the point-of-care without an Internet connection. Data is stored on your mobile device, so access is instantaneous. The app is available to Pitt and UPMC users through the HSLS subscription to the ClinicalKey resource.

The First Consult App is free to download and is available for the iPhone, iPad, and iPod touch from the iTunes App Store. It requires iOS 5.1 or later. The app is optimized for iPhone 5.

A data connection is required for the initial content download and content updates, but is not required to use the app itself. The app can be set to automatically update when used within a network connection.

The First Consult App is easy to use and navigation is simple. There are several search options:

For each disease or condition of interest, you’ll initially see a list of topics to select from, for example:

Once a topic is viewed, you can also choose to go directly to various sections within that topic, such as summary of evidence, FAQs, epidemiology, associated disorders, and more.

For more information about the First Consult App and other mobile friendly versions of HSLS resources, such as Micromedex or UpToDate, direct your browser to the HSLS Mobile Resources Web site. You can also contact the HSLS Main Desk at 412-648-8866 or Ask a Librarian.

Imagine your research demands quick answers to the following questions:

You can get the answers by reading scores of papers, but you may struggle to find time in your busy schedule. You may even wish that someone would read the papers for you. We have good news—meet Quertle, a free online search tool that gives you exactly what you are asking for. END_OF_DOCUMENT_TOKEN_TO_BE_REPLACED

ClinicalTrials.gov, a service of the National Institutes of Health, is a free online resource that links patients, clinicians, researchers, and the public to information about publicly- and privately-funded clinical trials from across the United States and the world.

ClinicalTrials.gov was launched in 2000 by the National Library of Medicine. In 2008, as a result of Section 801 of the Food and Drug Administration Amendments Act of 2007, ClinicalTrials.gov was expanded to include basic results reporting, including adverse effects. Information in the database is provided by study sponsors and principal investigators. In addition to basic results, study records link to published results, when available. 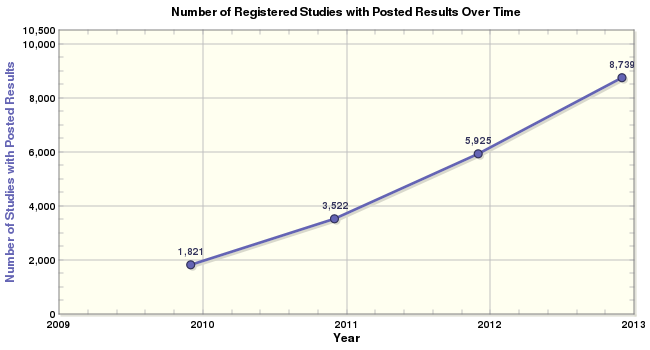 Results reported in ClinicalTrials.gov may not be published anywhere else, making it an essential resource for authors of systematic reviews and others who depend on the most current research on a drug or other therapy. A recent article in JAMA Internal Medicine, reported that the results of 25-50% of clinical trials are never published. Among those studies that are published, the authors found a two-year delay, on average, from study completion to journal publication.

ClinicalTrials.gov has a variety of resources for different users of the site:

Jonathon Erlen, history of medicine librarian, published “Current Journal Articles on Disability History: Dissertations” in H-Disability: an H-Net Discussion Network, December 1, 2013; “Dissertations/Theses” in the Canadian Bulletin of Medical History, 30(2): 245, 2013; and along with co-authors Jennifer Rhee and Susan Allender-Heagedorn, published “Bibliography: Relations of Science to Literature and the Arts, 2011,” Society for Literature, Sciences and the Arts, 2013.

Reference librarians Andrea Ketchum and Michele Klein-Fedyshin received 1st place in recognized posters for excellence in research, for their poster “A Renaissance of Resources Used for Clinical Searching: What’s the Impact of the NIH Public Access Policy and Open Access on Morning Report” at the 2013 Annual Meeting of the Mid-Atlantic Chapter of the Medical Library Association, in Pittsburgh, PA, on October 14, 2013.

Classes are held on the first floor of Falk Library (200 Scaife Hall) in Classroom 1 and on the upper floor of the library in Classroom 2. All classes are open to faculty, staff, and students of the schools of the health sciences at the University of Pittsburgh. They are also open to UPMC residents and fellows.

No registration is required for any of these classes. Seating for classes is first-come, first-served, until the class is full. Faculty, staff and students of the schools of the health sciences will need a valid Pitt ID or e-mail account to attend these classes. UPMC residents/fellows will need to show their UPMC IDs.