Although not a type of literature typically found in health sciences libraries, comics are receiving attention as a promising educational resource for the health professions. Green and Myers, using the term “graphic pathographies” to refer to comics depicting illness and healthcare experiences, have argued that these narratives may lead to a “visceral understanding” that conventional texts cannot replicate. Ian Williams, credited with coining the term “graphic medicine,” notes that comics contain images, symbols, and manipulated text that can depict not just outwardly obvious illnesses, but also concealed medical conditions and mental or cognitive states resulting from both. This complexity allows the author to portray illness in a way that “…transmits the raw veracity of lived experience.”

A traditional use of graphic texts is to include them as supplemental material in a standard or required class, to provide students with a patient perspective on a disease or condition. However, medical educators are also designing graphic medicine courses. These classes focus on comics themselves as a medium, requiring students to critically read and discuss medically themed comics, and to create their own comics depicting formative experiences in their education. In an early evaluation of one such course, Green found that medical students felt this use of comics enhanced clinical skills such as communicating with colleagues and feeling empathy.

Interested in learning more? Here are some well-known texts:

Pitt’s Health Sciences Library System (HSLS) and University Library System (ULS), and Carnegie Mellon University (CMU) Libraries are pleased to announce a new borrowing policy that allows faculty, staff, and students at either university to borrow materials directly from any of the libraries. At ULS and CMU libraries, the loan period for materials is 120 days for faculty, staff, and graduate students, and 90 days for undergraduate students. The loan period for HSLS books is three weeks. Borrowers at all libraries will have unlimited renewals.

Pitt or CMU borrowers must show a current university ID and may be requested to register for a Special Borrowers card.

PILOTS is the Published International Literature on Traumatic Stress database. According to the U.S. Department of Veterans Affairs website on PTSD (Post-Traumatic Stress Disorders), PILOTS is the largest citation database on this topic. It attempts to include all publications relevant to PTSD and other forms of traumatic stress, whatever their origin without disciplinary, linguistic, or geographic limitations. Coverage is from 1871 to the present, with monthly updates.

The database contains PTSD information on all types of people and situations, not only veterans. Use is open to the public. In addition to author, title, and source, each record also gives a brief summary and a list of keywords and descriptors from the PILOTS Thesaurus.

For example, the records found with a basic search on “campus attacks” include dissertations and journal articles. For journal citations, the detailed records indicate whether the publication is peer reviewed. It is possible to narrow the results by publication date, document type, language, and more. In addition, the Advanced Search feature allows you to limit the search terms to specific fields, such as the document type or publication title.

Other features include the ability to save a search, to set up alerts, and to create an RSS feed. It is also possible to export records to bibliographic management software such as EndNote.

To access this resource, type “pilots” in the search.HSLS box on the HSLS home page. The PILOTS Database can also be accessed from the Databases A-Z list. 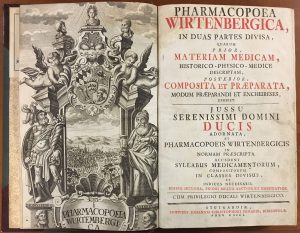 A pharmacopeia, in the modern sense, is a list of drugs and medicinal preparations, serving as an authoritative source of identification and a standard to be followed. Before the emergence of these works, however, medicines were described together with other treatments as part of general medical texts. Some were depicted in herbals and others in the materia medica books, with traditional medical remedies.

The first real pharmacopeia was, Pharmacorvm Omnivm, published by Valerius Cordus in 1546. Recognized as the official standard in Nurenberg, it inspired a chain reaction as many other European cities published their own local pharmacopeias. By the mid-17th century, this movement reached its peak, and the need to expand the jurisdiction of disparate pharmacopeias resurfaced. This eventually led to development of a standard for an entire country. The Pharmacopeia of the United States of America (Boston 1820) exemplifies this trend.

Publication of the Pharmacopœia Londinensis in 1618, a work widely disseminated in Europe through a multitude of foreign reprints, translations, and adaptations, illustrates another important aspect: authority. Backed by the Royal College of Physicians, the creation of this pharmacopeia was no longer one author’s responsibility. As time passed, institutional authority gradually shifted from societies (“colleges”) of physicians, to societies of pharmacists, or to governments responsible for producing national pharmacopeias.

The 18th century brought another important trend in the development of the modern pharmacopeia: an increased focus on scientific evidence. This was triggered by progress in the sciences, especially chemistry. It led to a reduction of listing remedies associated with superstitions or customs, and to greater interest in the testing of drugs. All of these changes happened slowly, and though the displacement started in the Age of Enlightenment, some traditional medicinal remedies persisted in pharmacopeias until the late 19th century.

Falk Library has original or facsimile editions of the texts mentioned above along with the beautifully preserved Pharmacopoea Wirtenbergica (Stuttgart 1750) pictured here. It served as a standard for the Duchy of Württemberg. This book is an example of a pharmacopeia combining a formulary and a textbook giving comprehensive information about the materia medica in addition to the required listings.

The National Institutes of Health invites your feedback on the newly redesigned ClinicalTrials.gov database. The beta version is available for user testing for at least one month and can be accessed from the “Try our beta test site” link in the upper left corner of the ClinicalTrials.gov homepage or directly at https://clinicaltrials.gov/beta/. Please submit your comments by clicking on the Give us feedback link in the upper right corner of the beta site.

“Basic Search” has been replaced with “Fielded Search.” This enhanced search feature provides more category choices, such as Conditions/Diseases and Study Location.

The content under the “Find Studies” menu and “How to Search” pages is still under construction and not available for testing.

Classes are held on the first floor of Falk Library (200 Scaife Hall) in Classroom 1 and on the upper floor of the library in Classroom 2. All classes are open to faculty, staff, and students of the schools of the health sciences at the University of Pittsburgh, who will need a valid Pitt ID or e-mail account. They are also open to UPMC residents and fellows, who will need to show their UPMC IDs. END_OF_DOCUMENT_TOKEN_TO_BE_REPLACED