As we enter a new academic year, the staff of the Health Sciences Library System is pleased to welcome new and returning faculty, staff, and students in the six schools of the health sciences: Medicine, Nursing, Pharmacy, Dental Medicine, Public Health, and Health and Rehabilitation Sciences.

We offer a wide range of services, collections, and comfortable spaces. Here are some highlights to get you started.

Our website, www.hsls.pitt.edu, functions as our virtual “front door.” Here you can easily find a list of popular resources, services, quick access to print and electronic resources, full-text searching of all of our e-books, A-Z lists of our e-journals and databases, news and announcements, upcoming classes and events, and much, much more. Our collection is very extensive, but if we don’t have something you need, our document delivery service can usually provide it within days at no charge to you. END_OF_DOCUMENT_TOKEN_TO_BE_REPLACED

The University of Pittsburgh has multiple facilities and resources to help investigators with research involving Next Generation Sequencing (NGS). Faculty and staff are available to identify appropriate technology applications, answer questions, and assist with research flow, including referrals to other facilities. END_OF_DOCUMENT_TOKEN_TO_BE_REPLACED

The HSLS MolBio Information Service and Data Services have collaborated in the creation of a new HSLS program—Spotlight Series: Software Developed @ Pitt—that focuses on software developed by Pitt health sciences researchers.  Sessions will begin with a 30-minute presentation of tool development and use cases, followed by instruction on software access/installation, discussion of parameters, and hands-on practice.

The first session in this series will be:

FRED: A Versatile Framework for Modeling Infectious Diseases and Other Health Conditions

Please register and bring your own laptop.

If you would like to present your software or have a suggestion of a software that we should spotlight please contact: HSLSDATA@pitt.edu.

YouTube is a robust online platform with one billion hours of videos viewed on a daily basis. When videos are used as an educational resource, there is a strong emphasis on accessibility; video content should be equally accessible to those who are deaf, hard of hearing, or late-deafened; are second-language learners; or who have learning disabilities. Video captions can help meet the needs of many of these viewers.

YouTube supports Closed Captioning (CC). CC contains text that corresponds to spoken words. When CC is on, the text appears within the video frame near the bottom and changes as the video advances.

The book, Die Handschrift des Schnitt- und Augenarztes Caspar Stromayr in Lindau im Bodensee (Berlin 1925), in Falk Library’s Rodnan Room, is neither very old nor very rare. Its importance is that it brings to our attention an early ophthalmology text by Caspar Stromayr that was never published before.

Caspar Stromayr was a 16th century German surgeon and ophthalmologist. A contemporary of Vesalius and Paré, he probably had some academic education, but mostly he achieved highly specialized knowledge through reading, consultations with other physicians, and empirical observations while practicing as a town surgeon in his native town of Lindau. He died there around 1566. In his lifetime, he did not influence 16th century medicine, his skills and knowledge were forgotten, and his eloquent unpublished work was buried in the library for almost 400 years. Today, however, he stands out among his contemporaries thanks to the manuscript he left behind.

His Practica Copiosa mostly deals with the surgery of hernia, to which there are two appended chapters on the surgery of the eye. The latter might have been intended to be a separate work, because the illustrations do not align with the original text, which has blanks where the illustration figures should be. Stromayr’s observations and thoughts were original and ahead of his time. The appended chapters on the etiology of cataracts and their treatment are of special importance because they are the first German ophthalmology work of known authorship. 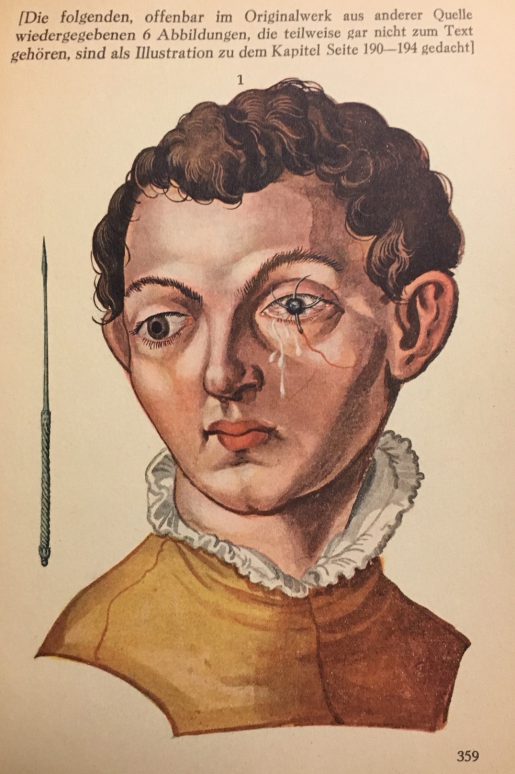 The richly illustrated manuscript was brought to light in 1925, when it was published by surgical historian Walter von Brunn. The English translation makes the text even more accessible. Nine out of 186 plates relate to the ophthalmology chapters. The plate presented on the right shows the eye with mature cataract undergoing a procedure with a threaded curved needle.

An exhibit on the history of cataract surgery is currently on display in the Falk Library lobby.

As Liaison to Pitt’s School of Pharmacy, Michele Klein-Fedyshin recently coauthored a poster at the American Association of Colleges of Pharmacy meeting related to her team’s systematic review project. The poster was entitled, “Coordination and Development of a Collaborative Effort to Assess Global Health Curricula.”  It describes the collaboration with pharmacists from eight other universities across the country as part of a systematic review and includes her liaison librarian role. Faculty from Notre Dame of Maryland University, North Dakota State University, Duquesne University, University of Washington, Roosevelt University, University of the Sciences in Philadelphia, and University of Kentucky joined faculty from the University of Pittsburgh to cooperate on the project led by Sharon Connor from Pitt’s School of Pharmacy. END_OF_DOCUMENT_TOKEN_TO_BE_REPLACED

Kate Flewelling, MAR Executive Director, was featured in a National Library of Medicine In Focus article titled “Where are they now? The 2007-2008 NLM Associate Fellows…10 Years On.”