Need information for a grant application or a homework assignment? This painless one hour session offers a quick cure!

This one hour workshop is designed to quickly introduce or update you about searching in the PubMed database.  Offered once a week, April–June, the topics include: building an effective search strategy; efficiently locating full-text articles; and setting up your personal MyNCBI account.

SHERPA/RoMEO is a regularly updated database of peer-reviewed journal publishers’ agreements from the Centre for Research Communications at the University of Nottingham in the UK. Currently, there are over 18,000 journals listed from 1,071 publishers in 60 nations. SHERPA/RoMEO is an important tool for authors seeking to disseminate their work more widely. Use it to find publishers or journals that permit deposit of a final version of a paper in a repository, such as PubMed Central or in an institutional repository, such as Pitt’s D-Scholarship@Pitt. Once an article is deposited in a repository, scholars can easily find the full-text version through a Google search. Most importantly, it behooves authors to compare and select the most author-friendly and dissemination-friendly publisher agreement before submitting a paper for publication. SHERPA/RoMEO is the tool of choice for that task. 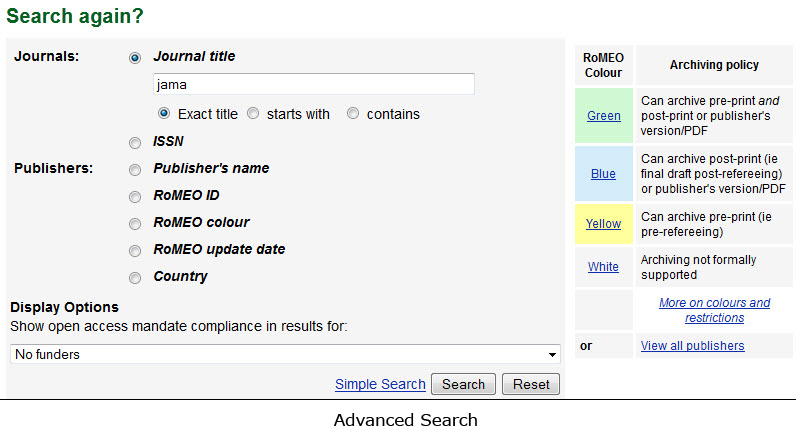 Search SHERPA/RoMEO by publisher or by journal title. Use Advanced Search for additional options, such as the display of policies relating to specific funding agencies (e.g., NIH or MacArthur Foundation). The system also color codes the archiving or deposit policies of publishers for a quick summary view, with “Green” indicating the most open policy, and “White” the most restrictive. In general, though, it’s recommended that authors review individual publisher policies, rather than rely on the color codes. 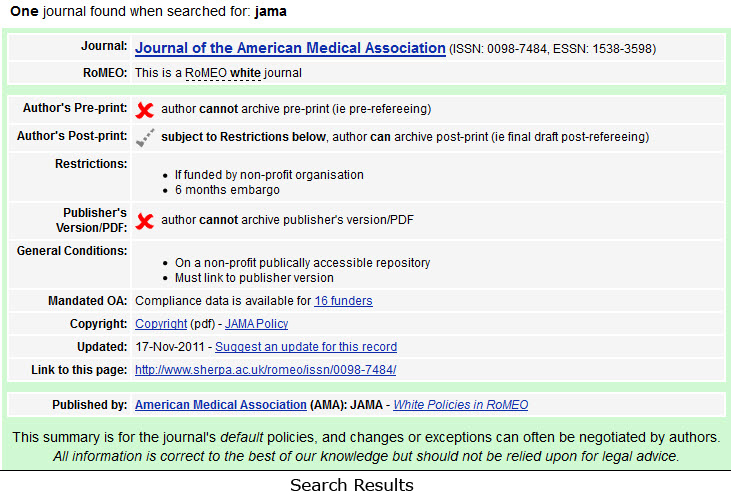 Once a publisher record is retrieved, the Default Policies link retrieves a summary table of that publisher’s policies. Note the top section where you’ll find links to Copyright Policy, Article Posting Policies, and Funding Body Agreements. These are the three main documents for authors to review. In the lower section, you’ll find General Conditions, Funding Mandates, and the versions of an article that can be deposited in a repository.

A link to the Directory of Open Access Journals (DOAJ) is available at the bottom of the SHERPA/RoMEO home page, providing access to publishing information on over 7,500 Open Access journals worldwide. Together, SHERPA/RoMEO and DOAJ give authors the power to select journals that will ensure the widest dissemination of their work.

Clinical trials play a vital role in developing better ways to prevent and treat diseases. Most researchers and health care professionals already understand the process, but members of the general public may be unfamiliar with the important role that clinical trials play in advancing health care. NIH Clinical Research Trials and You is a new Web site created by the National Institutes of Health that provides easy-to-understand information about clinical research and clinical trials, and the benefits of participation.

This authoritative resource explains what clinical trials are and how they function. Also addressed are the different types and phases of clinical trials, informed consent, and risks and benefits of participating in a clinical trial. Videos provide stories from patient and researcher perspectives. Another useful feature is a “Glossary of Common Terms” with clear definitions for terminology related to clinical trials.

For someone considering a clinical trial, there is a list of questions to ask researchers. These deal with the study itself (purpose, safety, length); possible risks and benefits (short and long term); participation and care (procedures used, location of medical care); personal issues; and cost (what health insurance covers, personal responsibility).

A section designed for health care providers gives pointers on how to talk to a patient about a clinical trial and how to refer them to one. Information specific to children and senior adults is also given in the Educational Resources section.

Anyone interested in participating in a trial should consult the section, Finding a Clinical Trial. ClinicalTrials.gov has information on “federally and privately supported trials in the United States and around the world.” There is also a ResearchMatch registry that will match potential participants with researchers.

CLC Main Workbench is available to University of Pittsburgh faculty, staff, and students.

To register, visit CLC Main Workbench: Registration on the Molecular Biology portal. For information about any HSLS-licensed molecular biology resource, contact Carrie Iwema at 412-383-6887 or e-mail Ask A MolBio Librarian.

Parts of this article were reprinted from CLC bio.

HSLS librarian, Leslie Czechowski, has announced her retirement in order to serve in the Peace Corps. She and her husband, Jan, had considered volunteering for almost thirty years. In fall 2010, they began the long application process and submitted their completed applications in January 2011. The wait began. They recently received their acceptance and entered into a new phase of the application process—the medical history. Since Jan and Leslie are in their early 60s and have many years of “health history,” they spent a great deal of time answering questionnaires, visiting doctors for follow-ups, and assuring Peace Corps medical staff that certain issues were minor. 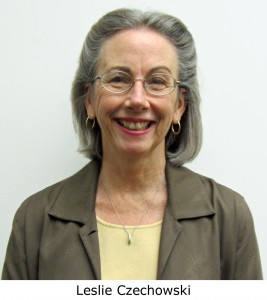 In February 2012, they finally reached their goal, receiving an invitation to serve as Peace Corps volunteers in Moldova, in Eastern Europe. Leslie and Jan, former Vice President for Academic Affairs at Washington & Jefferson College, have been assigned to Community and Organizational Development Advisor positions.

Moldova is a small country nestled between the Ukraine and Romania near the Black Sea. It is a former Soviet satellite that gained its independence in 1991. The official language is Romanian, but Russian is still spoken in many areas. It is a lovely area with a moderate climate, much like Pittsburgh’s, but has one of the lowest Gross Domestic Products in Europe.

Jan and Leslie leave June 5th for ten weeks of training that will include language immersion, education and training for their jobs, and education about the society into which they will be entering. Following that, they will serve two years in Moldova, probably living in a small community.

They are very excited about this new opportunity and challenge and will start a blog to let friends and family know about their Peace Corps adventures.

For more information, please direct your browser to the Peace Corps.

HSLS hosted the National Library of Medicine (NLM) traveling exhibit “Against the Odds: Making a Difference in Global Health” from January 16 to February 25. During that time, a number of visitors from the schools of the health sciences and beyond took advantage of the opportunity to view the exhibit, attend a lecture on global health and war, and attend associated lectures and film screenings sponsored by other groups at the University.

If you missed seeing the exhibit in person, you can go to the exhibit Web site to view the exhibit materials along with supplementary documents, videos, audio files and images. NLM produces many traveling exhibits; watch for Rewriting the Book of Nature: Charles Darwin & the Rise of Evolutionary Theory, the next NLM exhibit coming to Falk Library in fall 2012.

The Carroll F. Reynolds Medical History Society announced the establishment of the Erlen Lectureship, to recognize the many contributions of HSLS History of Medicine Librarian Jonathon (John) Erlen, PhD, to the Society. The Erlen Lectureship will be presented annually in February as one of the Society’s featured activities.

Through the years, John has arranged a long series of stimulating and scholarly speakers for the Society’s public lecture series, while overseeing logistics and END_OF_DOCUMENT_TOKEN_TO_BE_REPLACED 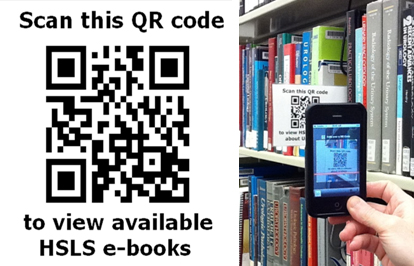 Using QR codes is easy! Simply scan a code with your mobile device equipped with a camera and a QR reader, and you will be directed to a Web listing of e-books related to a specific subject such as: nursing, cardiology, anatomy, or internal medicine. The full text of each book is readily available online for users logged into the Pitt wireless network or via remote access through your own personal wireless connection.

Not familiar with QR codes? See the article, “QR Codes Explained,” in the December 2011 issue of the HSLS Update. If you have ideas on how else you would like to see QR codes used in the library, please e-mail mar@pitt.edu.

This year marks the 100th anniversary of the founding of the Pittsburgh Neurological Society, later renamed the Pittsburgh Neuropsychiatric Society. An exhibit in Falk Library’s lobby celebrates this event with displays of the first four Minutes Books covering the years 1912-62.

The first 50 years of the Society’s existence began at a meeting in May 1912, with a gathering of nine physicians in Dr. Samuel Ayers home. Dr. Ayers was appointed president along with Dr. Edward E. Mayer as secretary. The meetings were very informal during the first two years. Members met at each other homes and had no dues to pay. The minutes were written afterward by Dr. George T. Wright, when he became secretary in 1914.

Over the years, the Society attracted an eclectic group of professionals including neurologists, psychiatrists, psychoanalysts, and neurosurgeons. Meetings were held at St. Francis Hospital, Allegheny General Hospital, Mayview State Hospital, the Pittsburgh Academy of Medicine, and several other locations. A group of 30-35 active members attended the monthly meetings. With the breadth of specialties, the Society served a formative role in the development of neurology and psychiatry in the Western Pennsylvania.

The fourth Minute Book ends with events celebrating Society’s 50th anniversary. It describes a series of five very successful special scientific programs organized between October 1961 and April 1962 in Scaife Hall. Each of the special meetings drew 200-400 guests. The papers presented during the celebration year were published as “Vistas in Neurosurgery” (University of Pittsburgh Press, 1964) and became a part of the permanent record illustrating the Pittsburgh Neuropsychiatric Society’s history.

The rest of the story is shrouded in mystery. What happened to this successful group of enthusiasts? The second half of the last Minute Book is empty. All attempts to trace any references to the society have failed. The officers elected for 1962-63 were: Henry W. Brosin (president), Robert J. Shoemaker (vice president), William E. Lebeau (secretary/treasurer), and Robert Love Baker (reporter). Perhaps the fifth Minute Book is still somewhere among their private papers. If you can shed a light on the mysterious silence of resources, please contact Falk Library at 412-383-9773 or e-mail gosia@pitt.edu.

The Pittsburgh Neuropsychiatric Society exhibit is open to the public during regular library hours.

Got a question? Chat with an HSLS librarian from your smartphone or other mobile device using one of the popular chat apps. Our buddy name is mhsls in Meebo, AIM, and Yahoo Messenger. On Google Talk, we’re m2hsls. You can reach us from 8:30 a.m. to 5 p.m. on weekdays and from noon to 4 p.m. on Saturdays (except Saturdays in June and July).