Historical manuscripts hand-copied by scribes largely disappeared after the invention of the printing press. With the advent of typewriters and computers, modern handwritten texts are also scarce and soon might disappear altogether. Today’s text editors do not offer the same opportunity to study penmanship, deletions, and notations to glimpse a writer’s personality and writing process. Falk Library’s small manuscript collection aims to preserve some handwritten resources to give researchers another angle from which to study the past.

Erik Homberger Erikson (1902-1994), a German-American developmental psychologist and psychoanalyst, is famous for his theory of the stages of psychosocial development, and for coining the term “identity crisis.” He never received a formal degree in medicine, but instead studied art, traveled widely in Europe in order to “find himself,” and studied psychoanalysis with Anna Freud in Vienna. He moved to the United States in 1933 and began working as a child psychoanalyst. He held various teaching positions at Harvard, Yale, and Berkeley. While working at the Austen Riggs Center in the 1950s, he was also a visiting professor at the University of Pittsburgh.

During his stay in Pittsburgh, Erikson worked with Benjamin Spock and Fred Rogers, and frequented the Western Psychiatric Institute and Clinic Library. In December 1964, he donated an early version of his noted work, “Insight and Responsibility.” The manuscript was transferred to Falk Library’s Rare Book Room in the late 1990’s. 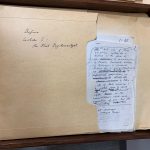 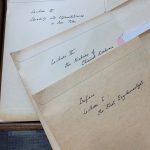 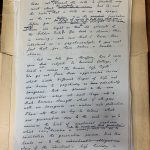 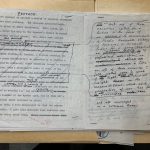 The manuscript is housed in a specially made wooden box. Each chapter is stored in a separate envelope and includes printed or typewritten pages of his essays and lectures, each penned with changes and revisions as well as handwritten pages of completely rewritten sections and additions. It clearly shows how Erikson changed his earlier writings for inclusion in his book, “Insight and Responsibility,” published by Norton (New York, 1964). It is a fascinating example of how his text was revised before the final version was published and illustrates Erikson’s writing process.