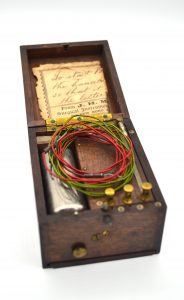 Physicians recognized the therapeutic use of electricity as early as the 1st century AD, centuries before the invention of modern electrotherapeutic devices. Scribonus Largus, the court physician to Roman Emperor Claudius, developed an interesting prescription for gout and headache. The advice was to stand on a torpedo fish, which was thought to deliver a strong electric discharge. The 18th century brought further developments by Luigi Galvani, the discoverer of animal electricity, and Alessandro Volta, inventor of the early electric battery.

Batteries used in electrotherapy evolved dramatically in the 19th century. Early ones used chemical reaction to produce electricity. Wet cells used in these batteries were prone to leakage. The invention of dry cells, in which paste replaced electrolytes, made them more portable. Batteries could provide direct current (galvanic), alternating current (faradic) or both. The variety of available devices made possible the advancement of electrotherapeutics. The widest use of medical batteries occurred between 1870 and 1920. These were considered to be a legitimate medical tool to provide electrical treatments both at home and in the clinic. Medical batteries fell out of favor in the 20th century. Today, when they appear on the antique markets or eBay, they are dubbed as “quack medical devices.” Why is that?

According to some historians, these batteries held an unusual place in the market. On one hand, they were legitimate medical devices for practicing physicians. On the other, they were also offered to consumers. The accompanying advertisements touted their ease of use and effectiveness in treating multiple ailments. Selling them as cure-all products pushed the batteries from the medical realm to the realm of quackery. There were physicians who advocated against home use of the devices. Their criticism stemmed from the fear that home use would dilute their clinical use by professionals, and not because practitioners thought portable batteries were a cheaper imitation of the product meant for quacks. There were also manufacturers who targeted both medical and consumer markets. Thus, the same product, used by both audiences, blurred the division between medicine and quackery.

The HSLS collection contains a portable medical battery produced by the London-based manufacturer of surgical instruments, J.H. Montague, circa 1890. The images below show the battery and its components in and out of the box. 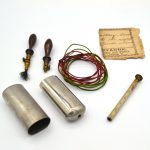 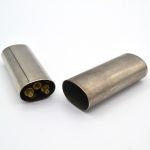 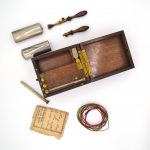 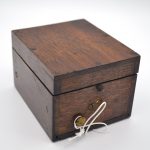