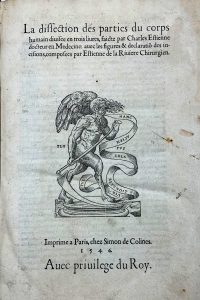 Charles Estienne (1504-1564) was a contemporary of Andreas Vesalius. He came from a family of Parisian printers and publishers. Estienne studied classical philology at the University of Padua in Italy, and upon his return to France, earned a medical degree at the University of Paris. He practiced medicine and taught anatomy at the Faculté de Médicine (1544-1547). His De dissectione partium corporis humani (1545) is often compared to the famous De humani corporis fabrica by Vesalius (1543). Estienne prepared anatomical drawings with the surgeon and artist Etienne de la Riviére. They partially printed the book in 1541, but its full publication was delayed due to a lawsuit in which both collaborators were involved. Had it appeared as planned, this work may have changed several “firsts” in medical history as claimed by Vesalius.

Estienne is remembered for the discovery of the central canal in the spinal cord, for recognizing that the esophagus and trachea are separate organs with different functions, as well as for an excellent description of the anatomy of the sternum and hepatic veins. Though he did not challenge the authority of Galen, like Vesalius did, and some critics point to other shortcomings, his work included many original observations. Estienne’s medical career was interrupted abruptly, when his brother, Robert, had to seek refuge in Geneva because of the Inquisition. Estienne gave up practicing medicine to run the family business. Unfortunately, he was not a successful printer. He bankrupted the company and spent his last years in prison. 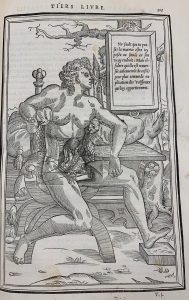