The career of Ludovic Hirschfeld was a rags to riches story. Ludwik Maurycy Hirschfeld, as he was known in Poland, was born into a poor Jewish family around 1814. His father worked as a ritual butcher in Warsaw. Helping his father, the young boy discovered his interest in anatomy. He delved into medical books, but also pursued studies in music to hide his true dream of becoming a physician. After an unsuccessful attempt to enter medical school in Wroclaw, he left Poland and walked to Paris to pursue this goal. Initially, he supported himself by playing violin and working as a janitor in an anatomy laboratory at the École Pratique de Médicine, but soon found work in the laboratory of the famous anatomist, Professor Jean-Baptiste Marc Bourgery, who quickly came to appreciate his skills in specimen preparations. He promoted Hirschfeld to be his main assistant for dissections. Later, with Bourgery’s help, Hirschfeld began assisting Professor Mathieu Orfila with autopsies. Orfila also quickly noted Hirschfeld’s aptitude, and as the dean of the medical school, helped him enroll in the program. Hirschfeld graduated with a medical degree in 1848, and remained in Paris for the next 10 years. In 1859, he accepted a position at the Medical and Surgical Academy in Warsaw (predecessor of the Warsaw University) where he practiced medicine and taught anatomy until his retirement in 1875. 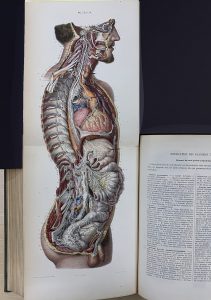 This work describing the nervous system and the sensory organs was originally released in 1853, and immediately brought the author critical acclaim and awards. It is considered the culminating achievement in a succession of anatomical masterpieces produced in France following the invention of lithography. Adoption and subsequent efforts to perfect this new technique led to the publication of fabulous anatomical color images by Gautier D’Agoty, Sarlandière, Bourgery, and the crowning jewel—Hirschfeld’s Atlas.

Hirschfeld’s Atlas can be viewed in the Rare Book Room by appointment.