Humphrey Ridley (1653-1708) was a little-known English neuroanatomist who studied medicine at Merton College in Oxford, and received his medical degree from Leyden University in 1679. Upon his return to England, he was a physician at Cambridge University and a member of Royal College of Physicians. There is not much known of his personal life, and he left only three published works: first on the topic of venereal diseases (1679), next on anatomy of the brain (1695), and the third on asthma (1703).

His book, Anatomy of the Brain Containing Its Mechanism and Physiology, followed two earlier and more commonly cited works in neurology, one by Thomas Willis and the other by Raymond Vieussens, but Ridley’s was the first neuroanatomy treatise in the English language. He acknowledged the brilliance of his predecessors, but also corrected some of their mistakes and omissions. He was the first to describe the ophthalmic artery and the ganglion of the fifth cranial nerve. According to Thakur, et al., Ridley was also the first to describe arachnoid cisterns and the arachnoid membrane, but because his contributions were not previously mentioned, Bichat and Ruysch held this claim even though their works were published later. Thakur and his colleagues speculated that Ridley’s stationary life and lack of clinical legacy might have contributed to the sad fact that his mastery in cadaveric injections and his novel contributions have gone unnoticed and uncited for so long. 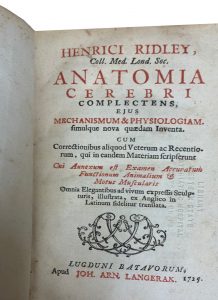 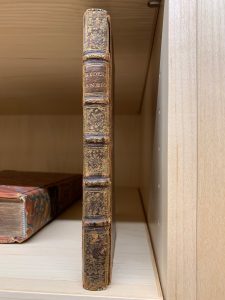 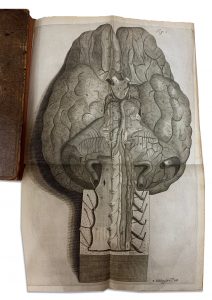 The Falk Library has the Latin edition of Ridley’s work on anatomy of the brain, Anatomia cerebri complectens ejus mechanismum & physiologiam (Lugduni Batavorum 1725). It is a well-preserved volume in a contemporary leather binding with stylish gilded ornaments and ribs on the spine. The work is illustrated with wonderful drawings by famous surgeon William Cowper (1666–1709). The initial “H” used in the English edition was erroneously mistaken for Henry instead of Humphrey, so that in the Latin edition of 1725, the name appears as Henrici.