The publication of Armamentarium chirurgicum in 1655 was a significant event. It is a pity that its author, Johannes Scultetus (1595-1645), a German physician, surgeon and anatomist, did not experience it. The work, meant to introduce new techniques and ideas to readers, was prepared from his notes by his nephew, Johannes Scultetus the Younger, ten years after his uncle’s death. The author described his own inventions and improvements to ease surgical operations and the removal of gunshots, shared his vast experience in cancer surgery, and introduced the “many-tail binder” (Scultetus Binder) still used in 21st century wound dressing. His book contributed to the education of barber-surgeons in the 17th century, particularly after it was translated from Latin and became more accessible to those not fluent in that language.

The second edition, published in The Hague in 1656, also included one hundred case histories, many describing patients treated by Scultetus in his role as town physician for the city of Ulm, Germany. Each case has the date and place of the patient’s first visit, description of the patient’s condition, followed by operations performed, medication given and its effect, and documentation of the patient’s progress through the days and weeks of recovery. With this work, readers of Armamentarium received a state-of-the-art education in 17th century medicine and surgery. Like the first edition, the Dutch version is illustrated with 43 copper engravings showing the instruments and techniques used in fighting disease. 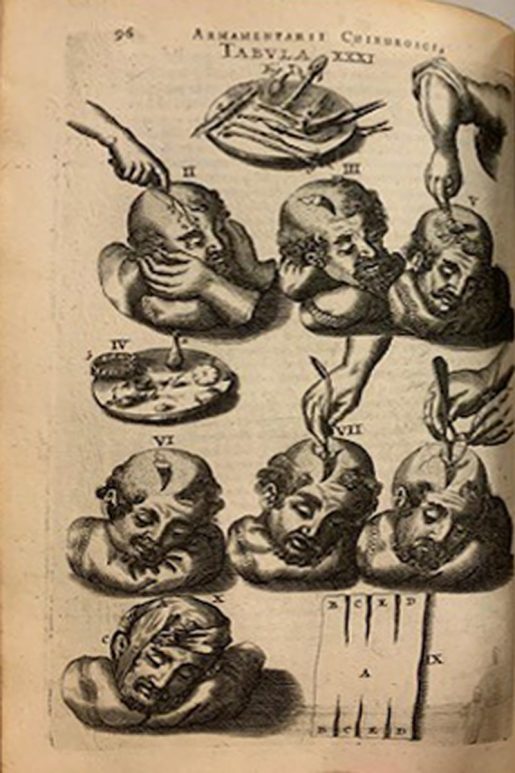 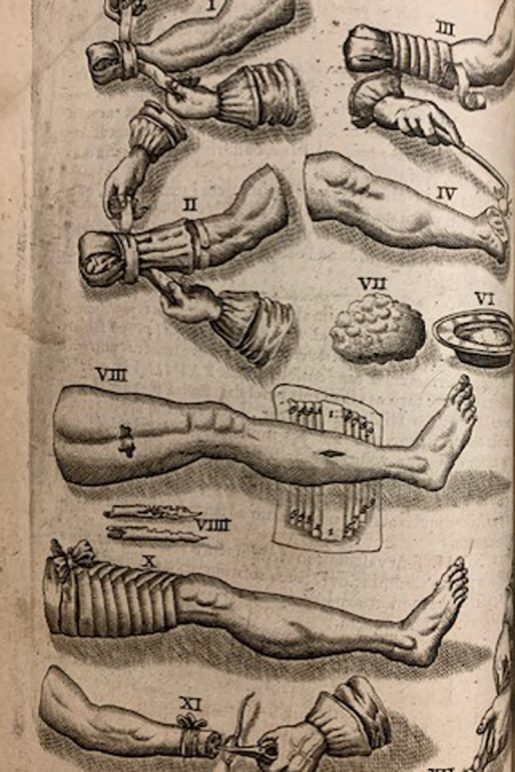 Falk Library has two copies of the second edition of this important work. One, in contemporary vellum binding purchased by and for the Library of the School of Dentistry in 1930. The other copy comes from the collection of Mark Ravitch and has a beautiful modern leather binding that imitates luxury bindings of the period; it has also a handwritten dedication from Dr. William Glenn, a well-known cardiac surgeon from Yale University. Both copies have some minor binding errors, but otherwise are in a fine condition.

Armamentarium chirurgicum can be viewed in the Rare Book Room by appointment.