October was Mental Health Awareness Month at Pitt. The Student Government Board organized multiple activities to raise awareness and send a clear message to those struggling with depression and/or anxiety that “you are not alone.” Looking at the history of mental illness, it is obvious that this caring attitude was frequently not the norm in the past.

One book from our collection that demonstrates this observation is Iconographie Photographique de la Salpêtrière published in Paris in 1877. It is a gem of medical photography, and was created by Désiré-Magloire Bourneville and Paul Regnard, disciples of Jean Martin Charcot. 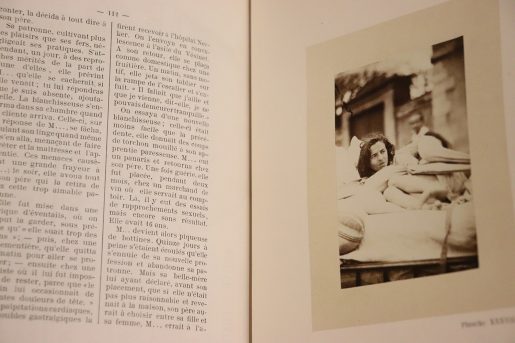 Charcot was in charge of the ward for “hysterics and epileptics” at Hospice Salpêtrière for 33 years. He treated photography as a laboratory tool, a disease archive, and a teaching method. He used photos and drawings, many made by himself or his students, in his classes. His ideas about hysteria were later refuted as the diagnostic criteria and understanding of illness evolved. However, his greatest legacy, development of the clinical neurological examination, was made possible by his pioneering long-term studies of patients.

Who were the patients photographed by Bourneville? They were mostly young women. (It was not until 1882 that Charcot described several cases of hysteria in men.) A typical patient was one of many children, frequently abused, and from an impoverished family. They were subject to similar poor conditions in the hospital, such as cramped quarters and lack of adequate food, heat, or detergents. For many, the hospitalizations were long and repeated. The medications used were mostly narcotics, but also chloroform and ether. The early belief in the organic etiology of illness resulted in treatments that would be considered cruel today, such as magnets, static electricity, or cauterization of the cervix with a hot iron.

Over the course of his career, Charcot became more sensitive to the patients’ physical and emotional pain. He began to use hypnosis in pathophysiological exploration and treatment. He changed his approach to the cause of hysteria to one that took into account social analysis and, thus, offered to the women at Salpêtrière what they needed—an asylum.

While such photography of institutionalized patients without their informed consent would be unacceptable today, Iconographie Photographique de la Salpêtrière is an example of historical approaches to mental illness. The book can be viewed in the Rare Book Room by appointment.