The Gout Collection at Pitt is the legacy of Gerald Rodnan (1927-1983), a former professor at the School of Medicine. Among its many rarities is a small leaflet, Doctor Rogers’s Oleum Arthriticum or Specific Oil for the Gout, published in 1735.

John Rogers was a respected apothecary in Stamford, Lincolnshire, and a licensed physician. He came upon a successful combination of oils in 1729. After testing it on himself, he treated several local fellow gout sufferers. William Stukeley, a physician and scholar well known in London circles, observed the success of Rogers’ medication. He gave an account of it to the Royal Society in London in 1733 (A letter to Sir Hans Sloan […] of the Royal Society about the cure of the gout…) and wrote Treatise of the Cause and Cure of the Gout (1734). The endorsement was powerful.

Doctor Rogers’s Oleum Arthriticum is an advertisement of the oils written in the form of letters between two gentlemen: one from London who successfully used Rogers’ treatment, the other from Dublin who learned about the cure from Stukeley’s book and decided to self-medicate based on Stukeley’s powerful endorsement. The letters are followed by additional directions for a regimen, in which Rogers recommends to vomit, bleed, and purge to enhance the work of the oils. He also includes information on pricing and the distribution of the medicine. 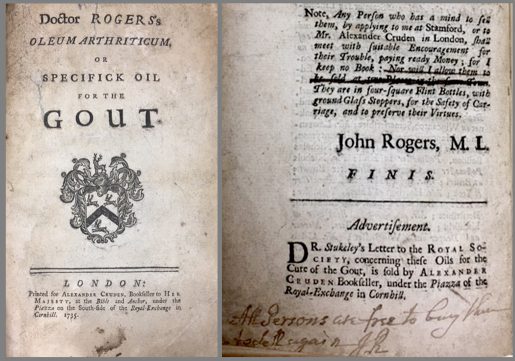 The unassuming leaflet bound in a simple contemporary paper hardcover has a handwritten dedication to Gerald P. Rodnan from Stewart C. Reed on the inside back cover and the collector’s bookplate on the inside front cover. It is very scarce, as most ephemeral prints are. Only four libraries in the United States appear to own a copy. What makes our item unique is the author’s handwritten note added on the last page. The printed statement Nor will I allow them to be sold at two Places in the same Town is crossed out and a new note added at the bottom: All Persons are free to buy these to sell again – J R.

The book can be seen in the Rare Book Room by appointment. For more information, please send an e-mail to techserv@pitt.edu