Saint Damien of Moloka’i, born Jozef De Veuster in Belgium in 1840, was a Roman Catholic priest who devoted his life to missionary work among the lepers in Hawaii. Jozef chose a religious life over the family farm. As soon as he was old enough, he joined the Congregation of the Sacred Hearts of Jesus and Mary and took the name Damien. In 1864, he traveled to Hawaii where he was ordained a priest and worked there for nine years. Moved by the fate of lepers deported by the government to Moloka’i Island, he volunteered to take charge of the settlement in Kalaupapa in 1873. The colony had no medical care or medicines. The lack of provisions, supplies, fresh water, and hygiene made living conditions harsh, but Father Damien stayed with his flock for 16 years, until his death in 1889. He was a voice to the authorities in Honolulu, organizing, building housing, helping, and caring for the sick. He was their spiritual leader, friend, and physician. According to his wishes, he was buried in Hawaii, but in 1936 his body was moved to his home country. 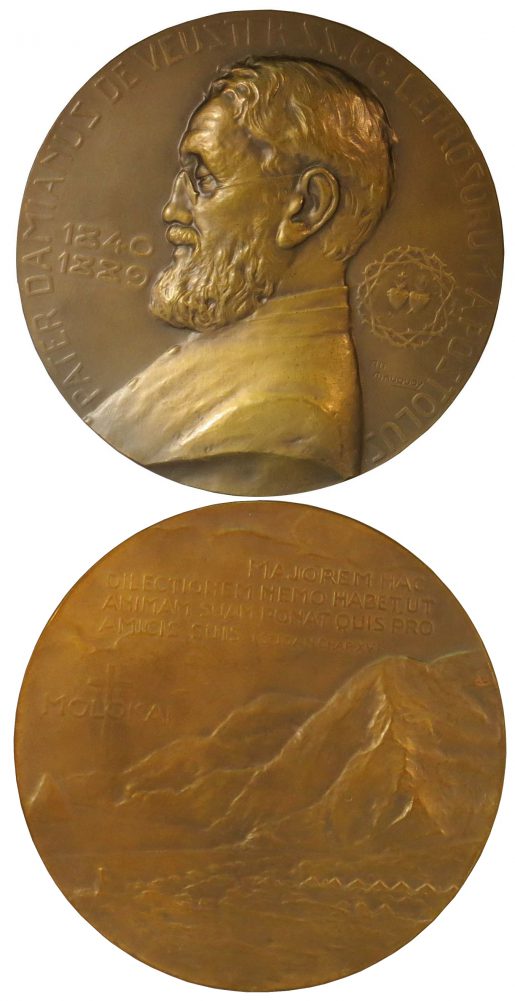 A commemorative medal—shown here—was struck on this occasion the same year. It is part of the HSLS Medical and Scientific Medals Collection. It was designed by Belgian medalist and sculptor, Alfonse Mauquoy. The medal shows Father Damien, “Apostle of the Lepers,” on one side and the Hawaiian landscape of Kaluapapa Peninsula on the other. The Biblical quote, “Greater love has no one than this, that one lay down his life for his friends,” chosen as part of the design is quite appropriate since Father Damien contracted the disease while caring for the lepers. Because of this, he was accused of immorality which inspired Scottish author Robert Louis Stevenson to visit the colony and write his passionate defense of the priest. Damien was exonerated and his lifetime of service to the sick was rewarded when he was canonized in 2009.

Both the medal and the reprint of Stevenson’s letter are currently on display in the Falk Library lobby. For more information, contact HSLS Collections & Digital Library Services.