The third part of this series on the use of photography in medical books continues to explore outstanding examples from the Falk Library historical collection. This issue features an exquisite atlas of stereoscopic images for studying hernia, titled Stereoskopbilder zur Lehre von den Hernien by Eugen Enderlen and Emil Gasser, published in 1906. 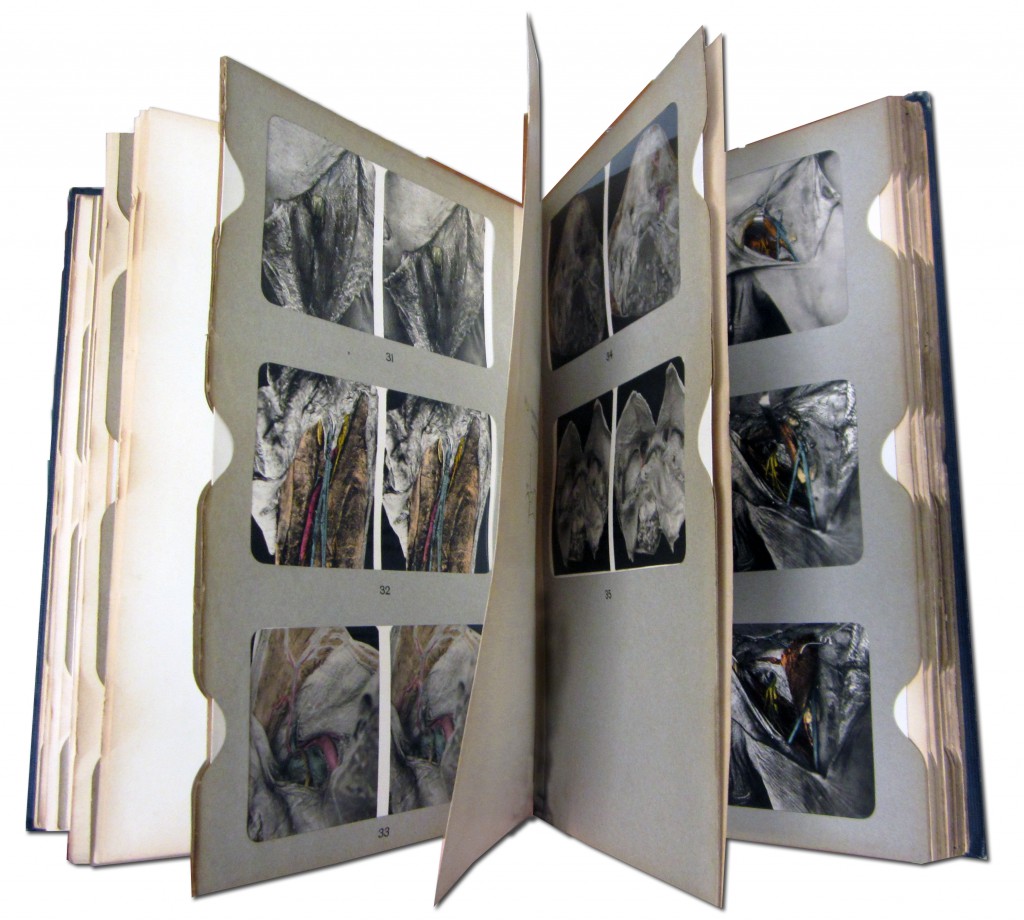 Stereoscopy is a technique for creating depth in an image by presenting two offset images separately to the left and right eye of the viewer. In 1838, Charles Wheatstone showed that the illusion of depth can be created from flat pictures that differed only in horizontal disparity. Stereoscopy became popular after 1849 with the invention of the prism stereoscope by David Brewster. Photography popularized stereograms (side-by-side pictures) even more. Since objects could be experienced in 3-D, stereoscopic images became widely used in books about geography, history, and medicine, among other subjects.

Sterreoskopbilder zur Lehre von den Hernien is an example of the cooperation between surgeon Eugen Enderlen and anatomist Emil Gasser. It includes photographs of dissected preparations that illustrate the anatomy of hernias. They come from what is known today as the Gasser-Strahl collection in the Anatomical Institute at the Philipps University in Marburg, Germany. The atlas consists of 72 pages of text and 17 cardboard slide holders which contain 72 side-by-side photographs. Each pair of images is matched with a corresponding description on the opposite page. For purposes of clarity, some of the photographs were enhanced with color. The same color code was used throughout the atlas: red for arteries, blue for veins, and yellow for nerves. When adding color was superfluous, the images were left unchanged. As intended by the authors, the atlas can be viewed using any standard stereoscope. However the naked eye can be trained to perceive the depth of stereoscopic pictures and give the user the illusion of a 3-D image without the use of a stereoscope.

The book is located in the Rare Books Room at Falk Library and can be viewed by appointment.

Part 1 of this series appeared in the October 2011 HSLS Update and explored the first applications of photography in medicine; while Part 2, in the December 2011 issue, examined photography in the service of medical advertisement.