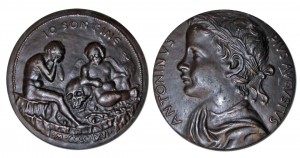 In addition to the many exquisite rare books in the Falk Library Rare Book collection, there are a number of valuable non-literary items. As objects, they can sometimes speak to us more strongly than text, since they appeal not only to our intellect but also to our senses. Among the artifacts is the Civil War Post-Mortem Surgical Set, which was described in detail in a December 2010 HSLS Update article. Another interesting collection is the commemorative medals associated with the field of medicine. These medals consist mostly of 19th and 20th century specimens, though there are a few that date as far back as the 15th century.

One medal in the collection commemorates the Roman emperor Caracalla. It was struck in Venice, Italy, in 1466. The design is loosely copied from a coin and is attributed to the Venetian artist, Giovanni Boldù, who was active from 1454-1477. It is a large medal (90 mm in diameter) struck in bronze. The obverse has an image of the Roman emperor Caracalla as a boy done in high relief. The youth’s bust facing left is circled by the name ANTONINVS PIVS AVGVSTVS (Antoninus Pius Augustus). The reverse side of the metal pictures the artist seated naked with his head in his hands; before him there is the Genius of Death, resting on a skull; above him, the inscription IO SON FINE; and below him, the date MCCCCLXVI (1466).

As commissioner of a large public bath house (thermae) in Rome, Caracalla fits the pattern of men accomplished in the field of medicine. The building that housed the bath house was constructed during his reign between 212 and 216 AD. It was heated by the ancient hypocast system of under-floor heating, and supplied with water by the Aqua Marcia Aqueduct. The bath house consisted of cold and hot rooms, a pool, gyms, and two libraries. It was free, open to the public and in use until the 6th century, when the hydraulic installations were destroyed. While in use, it provided a place where Romans could bathe and possibly receive health benefits from the baths. Today the ruins of the Baths of Caracalla are a tourist attraction in Rome.

This medal can be viewed in the Rare Book Room by appointment.