Treasures from the Rare Book Room

The Diseases Incident to Armies: With the Method of Cure, translated from the original of Baron Gerard van Swieten, was published for the use of military and naval surgeons in America. 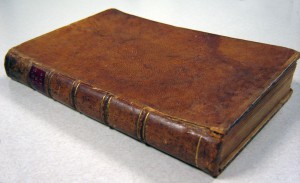 The original English translation of van Swieten’s work on the hygiene of troops and diseases impacting the military was published in London in 1762, and the first American edition printed by Robert Bell appeared in Philadelphia 14 years later. Thus, the information derived from foreign experiences in military hygiene was made available to young surgeons in the War of Independence. Swieten’s text was enhanced by the addition of several chapters, including “Some Brief Directions to Be Observed by Sea Surgeons in Engagements” by William Northcote (extracted from The Marine Practice of Physic and Surgery, 1770) and, “The Nature and Treatment of Gun-Shot Wounds” by John Ranby (extracted from The Method of Treating Gunshot Wounds, 1744).

The Falk Library copy is bound with another interesting voice in the campaign to improve soldiers’ well-being: the 2nd edition of John Jones’s Plain Concise Practical Remarks on the Treatment of Wound and Fractures, to Which is Added an Appendix on Camp and Military Hospitals Principally Designed for the Use of Young Military and Naval Surgeons in North America, published in 1776.

The added work is noteworthy for several reasons. The original edition, published a year earlier, was the first textbook of military hygiene written by an American author. The target audience was army surgeons who had little, or no, formal medical education. According to European tradition, surgeons did not need a deep knowledge of medicine since they were working under the direction of physicians. The text is also significant because it was written by America’s first full professor of surgery. Jones delivered his lectures in surgery in the King’s College Medical School in New York City from the beginning of his appointment in 1767, until 1777 when he joined the American forces as a surgeon for the 10th Massachusetts Regiment.

The book also has an interesting provenance. It belonged to Jacob Ehrenzeller Jr., who is considered to be America’s first medical intern. He apprenticed as apothecary in Pennsylvania Hospital in Philadelphia in the years 1773–1777 and was rewarded a certificate of medical competency. Later, he served as a surgeon at the battle of Monmouth, and after the war established a practice in Goshen, Illinois. There he was able to live comfortably on his physician income, which was not the case for many doctors at that time. The Falk Library copy is signed by J. Ehrenzeller Jr. and has three handwritten notes with corrections to the suggested measurements used in Swieten’s recipes, and a comment on the use of sauerkraut in the English Navy as a remedy for the scurvy (proving that his apprenticeship was well spent). 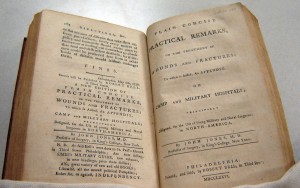 The book, The Diseases Incident to Armies Including Plain Concise Practical Remarks on the Treatment of Wound and Fractures, comes from the collection of our notable donor, the late Dr. Mark M. Ravitch, and is located in the Rare Book Rooms at Falk Library. It can be viewed on Mondays and Wednesdays from noon–3 p.m., and other times by appointment.