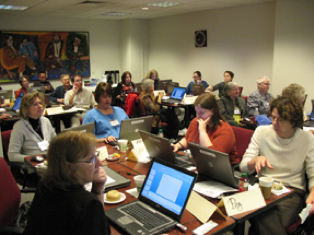 For the past ten years, HSLS has hosted librarians from across the U.S. and Canada at our popular “Systematic Review Workshop: The Nuts and Bolts for Librarians.” This intensive 2.5-day workshop has been offered three times a year since November 2009, growing out of an internal working group to address the increasing number of requests from Pitt faculty for systematic reviews. Since then, the workshop has provided instruction to more than 700 participants, and brought rave reviews and recognition to HSLS.

Charlie Wessel commented, “When we began this instruction in 2009, we thought we would offer the workshop once or twice, but demand and interest indicated a different story. We shared our knowledge and in return learned from the hundreds of participants from libraries across the country and Canada.”

Participants came from the disciplines of health sciences, engineering, physics, psychology, and business and represented a variety of organizations, including:

But all good things come to an end…the instructors decided that the workshop offered in July 2019 would be the last, and it was time to move on to new challenges.

Kudos for a job well-done!