Jacques-Fabien Gautier D’Agoty (1717-1785), the French anatomist and printmaker, produced his first color printed image of a shell in 1737. He started color printing by making reproductions of oil paintings, but soon turned to producing color-printed images for science. Between 1745 and 1785, he produced more than a dozen illustrated works on anatomy and physics. His cooperation with anatomist Joseph-Guichard Duverney resulted in the publication of three anatomy atlases. After the anatomist’s death, Gautier himself took over the anatomical dissections and demonstrations used for later works. He provided color plates for many periodicals. As a member of the Académie des Sciences, Arts et Belles-Lettres de Dijon, he used his scientific activity to promote his business. His entrepreneurial skills made his printing atelier into a successful family enterprise. He and all of his five sons were influential members of printing and artistic communities in Paris in the mid-18th century. 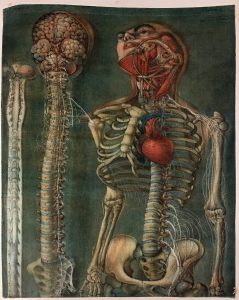 The image on the right comes from the Anatomie générale des viscères (1752). It is the first of two plates illustrating the complete nervous system. It is also the largest book in the Falk Library collection and includes the largest illustration (47 cm x 70 cm). The careful examination of this volume gives a glimpse into the printing process described in Part 1 of this series. One can spot a hint of red or yellow from the consecutive impressions of color, a sighting of pure blue when plates were slightly misaligned, or final handmade touch-ups to bring out the fine detail of the drawing obscured in the printing process. There are plenty of anatomical atlases to study and learn the details of human anatomy, but only Gautier D’Agoty’s works are such spectacular examples of the early anatomical atlases in color.