In 1650, Robert Pemell’s De Morbis Capitis, or, Of the Chief Internal Diseases of the Head, was published in London. According to Alan Pestronk (Archives of Neurology 46, no. 2 (1898): 215-220), this was the first neurology book written in English. A country physician from Cranebrooke, Kent, Pemell (died 1653) would be completely forgotten if not for the writings he left behind.

Little is known about the author, with the exception of what can be inferred from his texts and the biographies of his contemporaries. He probably received some formal education since his works show the knowledge of classical and contemporary writers, but he did not have a university degree. Instead, he was licensed by the Church to practice as a surgeon and physician in the diocese of Canterbury. His book on the diseases of the head was published at a time when vernacular texts were on the rise. Nevertheless, not trusting that the book would be well-received with an English title, Pemell gave his work the Latin title. 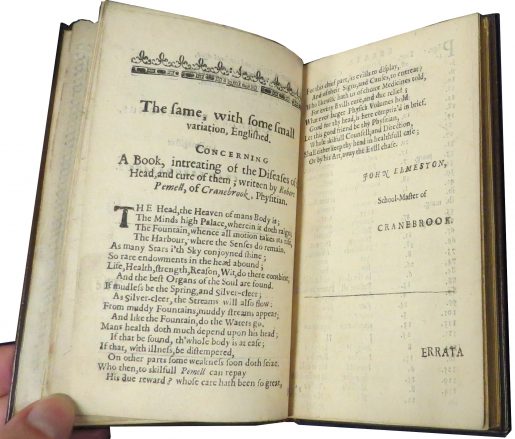 Each chapter in De Morbis Capitis is devoted to one syndrome, including among others: vertigo, spasms, paralysis, epilepsy, and various types of headaches. Pemell discusses diagnosis based on standard examination followed by prognosis and explanation of possible treatments. He attributes certain diseases to dysfunction of a specific part of the brain. The suggested remedies are mostly based on animal and plant extracts. Alan Pestronk was of the opinion that “the treatment of brain diseases, as outlined by Robert Pemell in De Morbis Capitis, is probably a description of a high standard of neurologic practice in the 17th century English countryside.”

The book is small (the size of the 3½ x 5½ photograph). The binding is modern leather with gold lettering on the spine and gilt edges around the text block. The title page is loose, but otherwise the book is in fine condition. It is rather scarce. Only nine libraries claim to own the 1650 edition of Pemell’s book. At some point, it was acquired by the Western Psychiatric Institute and Clinic Library and is one of the highlighted titles on our Psychiatry Collection website. It can be viewed in the Rare Book Room by appointment.