Have you ever wondered how rare are the books in the Rare Book collection? What makes a book “rare” and worth protecting? There is no clear cut definition. The general rule is to consider rare any book produced before 1801, except for English books which have to be issued before 1641, and for American books published west of Mississippi before 1850. This understanding encompasses manuscripts, incunabula (books produced in the first years after the invention of the printing press, 1455-1501) and books printed before the era of mass production, when all elements of the printing process such as paper, print, or illustrations were done by hand. In addition to age, any of the following qualifying features should be considered: materials used, scarcity, uniqueness, fine binding and illustrations, or intrinsic importance. Each of these criteria is relative, since not every old book is rare and not every rare book is old. Even when something is unique and irreplaceable, it does not mean it has a high value or is important. There are no clay tablets, scrolls, or illuminated manuscripts in the Falk Library collections, but among rare books there is one which, though not old or scarce, is a “must have” in a medical collection.

Papyros Ebers (Leipzig 1875) is a facsimile edition of one of the oldest medical texts, an Egyptian papyrus dating to circa 1550 BC. There is abundant evidence that it was copied from a series of even earlier books. It is written on a 20 meter long scroll. The papyrus covers mental disorders, surgical knowledge of bone-setting and removal of tumors, eye and skin diseases, and more. It includes about 700 formulas, remedies and incantations and is the most complete record of medical knowledge in ancient Egypt. The scroll is named after Georg Ebers, German Egyptologist from the University of Leipzig who purchased it. The published papyrus included an introduction and hieroglyph-Latin dictionary, but it was not translated until 1890, when the German translation appeared followed by the English translation in 1930. 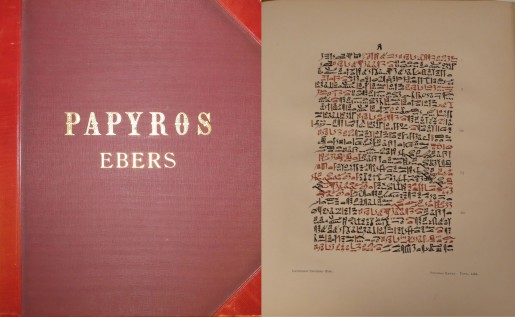 The facsimile is currently on exhibit in the Library’s front lobby. For further information, e-mail techserv@pitt.edu or call 412-383-9773.