Hieronymus Fabricius ab Aquapendente (1537-1619) was an Italian surgeon and anatomist and one of the founders of modern embryology. He spent most of his life in Padua, eventually becoming chair of surgery and anatomy. During his long academic career he attracted students from all over Europe. Fabricius changed the teaching of anatomy by designing and using the first theater for public anatomical dissections. He 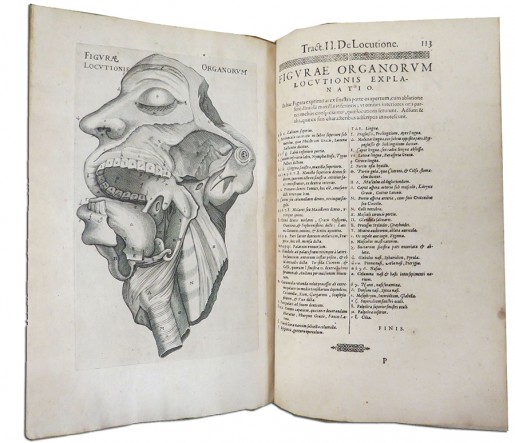 laid the foundation for modern anatomical illustration by focusing strictly on technical issues, and abandoned the backgrounds and artistic impressions present in his predecessors’ works. Fabricius also contributed to the development of comparative anatomy and surgery. He was the first to describe venous valves. Though he failed to see that they were proof of the circular motion of blood, his work may have inspired William Harvey’s De Motu Cordis.

His posthumously published four treatises, Tractatus Quatuor (Frankfurt, 1624), includes his advanced embryology work on the formed fetus (De Formato Foetu);¹⁻² two texts on speech; and the treatise on venous valves. The book is bound in fine old leather, with a ribbed spine, gold lettering and decorative stamps. It has 41 copper plates including a spectacularly engraved title page with a dissection scene and images illustrating the organs of speech, inside the diaphragm, and an umbilical cord wrapped around the neck of a fetus.