The 19th century invention of photography captured the attention of the medical profession. This new technology offered physicians a more objective and accurate tool to record medical conditions and observations than the illustrations they used in the past.

The first application of photography in medicine was in 1840 when Alfred Donné took successful images of bones and dental tissue, shortly after the public presentation of daguerreotype as a new technique.1 The first medical book illustrated with photographs was the Album de Photographies Pathologiques, published in 1862.2 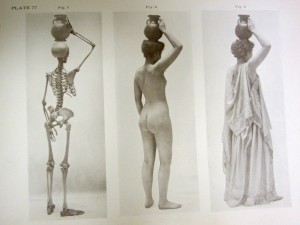 Falk Library owns the impressive Anatomy in Its Relation to Art by George McClellan, published in Philadelphia in 1901, which is a fascinating example of photography used for illustrative medical purposes.

George McClellan (1849-1913) was the founder of Jefferson Medical College and an artist as well as a physician and teacher. He is best-known for his Regional Anatomy in Its Relation to Medicine and Surgery, for which he not only performed the dissections and wrote the text, but also photographed and hand-colored the original images for reproduction. Anatomy in Its Relation to Art is a lesser-known but equally interesting book. It is a study of the influence of skeleton and muscles on the surface form of a figure in motion and at rest, illustrated by 338 original drawings and photographs made by the author. It showcases McClellan’s skill as both an artist and a physician. The book was donated to the library in 1932 by the estate of Stewart LeRoy McCurdy, AM, MD, professor of anatomy, oral and general surgery and one of the founders of Pittsburgh Dental College.

The book is located in the Rare Book Rooms at Falk Library and can be viewed by appointment.

1Tobin, W. “Alfred Donné and Léon Foucault: The First Applications of Electricity and Photography to Medical Illustration,” Journal of Visual Communication in Medicine, 29 no.1 (2006):6-13.