The library has no documents tracing the origin of the post-mortem surgical set found in our collection. How did it get here? Who donated it? To whom did it belong earlier? Though we don’t have the answers to these questions, we are grateful to the unknown benefactor who donated this precious artifact. 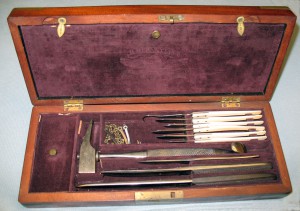 The instruments were produced by Hermann Hernstein & Son. There are three key factors that identify the set as belonging to the Civil War era: (1) the mark of H. Hernstein & Son, which was used from 1862 to 1865, when the company was selling directly to the military under contract; (2) Herstein & Son’s address from 1855 to 1867, 393 Broadway in New York City, is engraved on the instruments; and (3) 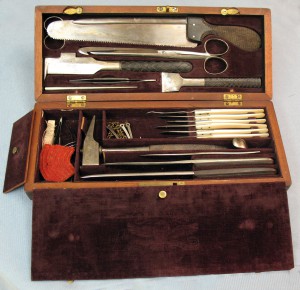 the wooden case contains a single sliding latch not found on any civilian instrument sets of the period.

The set is in almost perfect condition. It comes in the original wooden case with cast brass corners, a burgundy velvet lining, and a removable partition dividing two layers of instruments embossed with the Hernstein logo and eagle.

Inside the case are two layers of instruments. The upper compartment includes a chisel, a rachitome chisel, scissors, bowel scissors, a lifting back bone saw, dissecting forceps, and a blow-pipe used to inflate arteries. The bottom layer holds a costotome (hammer), a full set of scalpels, and a tenaculum with ivory handles, cartilage knives, and sutures with a curved heavy cloth holder for needles, suture thread, tissue forceps and retraction chain hooks in a small covered compartment.

We do not know whether the set was used during the Civil War or whether it came from the company’s surplus. Nearly all manufacturers over-produced at the end of the war, even though the U.S. Army cut military surgical set orders. The set is a beautiful piece of medical history located in the Rare Book Rooms at Falk Library. It can be viewed on Mondays and Wednesdays from noon–3 p.m., and other times by appointment.