The University of Pittsburgh Health Sciences Library System and the University of Iowa Hardin Library for the Health Sciences have been awarded 16 million dollars to support the Network of the National Library of Medicine (NNLM) All of Us Program Center (NAPC) for 2022-2026. The NAPC serves an important role in coordinating engagement and training activities offered by NNLM in support of the NIH All of Us Research Program (All of Us), a large, multi-faceted research initiative seeking to collect biomedical data from one million people across the United States, to support precision medicine by diversifying the data available for biomedical research.

The NNLM is a collaboration of academic institutions, hospitals, health departments, libraries, information centers, and community-based organizations that provide health information resources and services, or are otherwise engaged in health and wellness in their communities. These institutions are regional pillars serving as critical access points for health information and education in their communities. The NAPC will leverage this Network to disseminate and amplify health programs and resources while raising awareness of, and engagement with, All of Us.

END_OF_DOCUMENT_TOKEN_TO_BE_REPLACED

Uniquely identifying the reagents used in experiments is crucial so that anyone who wants to repeat the experiment can use precisely the same reagents reported in the published literature, making research findings reproducible. However, as Vasilevsky et al. noted, the traditional scientific research reporting practices often do not provide enough information about used resources, and researchers lack the ability to distinctively identify experimental reagents. As a result, research reproducibility suffers and a simple search query such as “What studies have used the antibody of my interest?” produces unsatisfactory results.

To address this issue, Research Resource Identifiers (RRIDs) were created. RRIDs are persistent unique identifiers assigned to biological resources, such as antibodies, plasmids, model organisms, cell lines, and software tools. Though catalog numbers and vendors are typically cited, these sometimes change over time. RRIDs never change; the RRID initiative is designed to assist researchers in sufficiently citing these resources in published literature.

END_OF_DOCUMENT_TOKEN_TO_BE_REPLACED

Podcasts are an extremely popular form of entertainment, particularly among younger audiences, with Statista survey results showing that over half of 12-34 year-olds listen to podcasts on at least a monthly basis. Podcasts can be a great way to pass the time during a commute, on a road trip, while going for a walk, and more. They are certainly meant to be engaging and entertaining, but many are also meant to be informative. In fact, AccessMedicine (an educational database available through HSLS) contains several podcasts that are of interest to a health sciences audience!

Harrison’s Podclass is hosted by Charles Wiener, MD, and Cathy Handy, MD, both from the Johns Hopkins University School of Medicine. They provide discussions on key principles of internal medicine using board-style case vignettes from Harrison’s Self Assessment and Board Review. The podcast’s episodes are typically only around five minutes long, making them ideal for slotting into a lecture or for a quick listen between classes.

END_OF_DOCUMENT_TOKEN_TO_BE_REPLACED

HSLS offers classes in a wide array of subjects — citation management, data science, literature searching, and more! You can quickly view all upcoming classes and events or sign up to receive the weekly “Upcoming HSLS Classes and Workshops” email.

Featured workshop of the month: Scientific Drawing with Illustrator

Register for this virtual workshop*

In scientific manuscripts, visual communication is essential, as illustrations can help to deliver the right information or messages clearly and concisely. Scientific illustrations allow ideas, theories, and details to be conveyed in a compelling and informative approach. The artwork requires that both technical and aesthetic skills be incorporated with scientifically-informed conclusions to create precise depictions of the subject. In this intermediate-level workshop, participants will work hands-on with Adobe Illustrator to create shapes and drawings to be used in figures for publications and presentations. END_OF_DOCUMENT_TOKEN_TO_BE_REPLACED

You’re invited to complete the Class Categories Survey, giving HSLS valuable feedback on how our classes are organized and providing you with a chance to win a $50 money gift card.

Audience: Pitt health sciences students, staff, and faculty, as well as UPMC fellows and residents, are encouraged to participate

Length of Survey: 10 minutes or less to complete

Responses: All responses are anonymous, and will be used to organize new HSLS online class content. There are no right or wrong answers!

END_OF_DOCUMENT_TOKEN_TO_BE_REPLACED 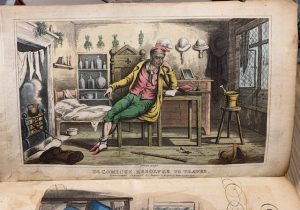 “The Adventures of Doctor Comicus or The frolics of fortune; a comic satirical poem for the squeamish & the queer in twelve cantos” was written by A Modern Syntax in the 19th century. It is a satirical poem about the amusing misfortunes of a poor country doctor during his trip to find a wife and to escape life as the all-in-one village barber, doctor, schoolmaster, and sexton. Whether it was a dream or a real escapade, it ended with Doctor Comicus’s sobering observation that,

“Man in his eager haste to seize a bliss,

Which nature never destin’d should be his […]

He dreams of riches, grandeur, and a crown,

He wakes, and finds himself a simple clown.”

The author hiding under A Modern Syntax cleverly tied his pseudonym to the widely popular “Dr. Syntax” books, published between 1815 and 1828, that were written by William Combe and illustrated by famous British cartoonist Thomas Rowlandson. A Modern Syntax took advantage of the popularity that Dr. Syntax had earned as a hero through his peregrinations. At the same time, the original Dr. Syntax story was separated from the parody by using the label “modern.” A Modern Syntax introduced Doctor Comicus as a new hero who reaped the benefits of his predecessor’s fame. It was one of many imitations of Combe’s earlier parody.

END_OF_DOCUMENT_TOKEN_TO_BE_REPLACED

Congratulations to Denny Miller, Metadata Specialist, who was honored by the University for 20 years of service. In his current role, he maintains electronic resource coverage, adds and removes resources, updates bibliographic records, and assists in troubleshooting access issues.

Farewell to Joel Marchewka, Web and Application Programmer, who is leaving HSLS to become a Drupal Developer at Carnegie Mellon University.