When was the last time you used Wikipedia? Considering that Wikipedia is estimated to be the fifth most-used website in the world, there’s a good chance that you’ll find yourself on Wikipedia fairly often. Whether you go there directly or Google something that leads you to a Wikipedia article, there is no denying that there seems to be a Wikipedia article for almost any topic you can imagine. In English-language Wikipedia alone, there are over 50,000 articles on health and medicine topics. Medical professionals, health science students, and the public use Wikipedia to find health information. Wikipedia has been estimated to be the most frequently used health information resource on the web, with more page views than government-run websites such as that of the National Institutes of Health in the U.S. and the National Health Service in the United Kingdom, as well as privately-owned sites like WebMD. 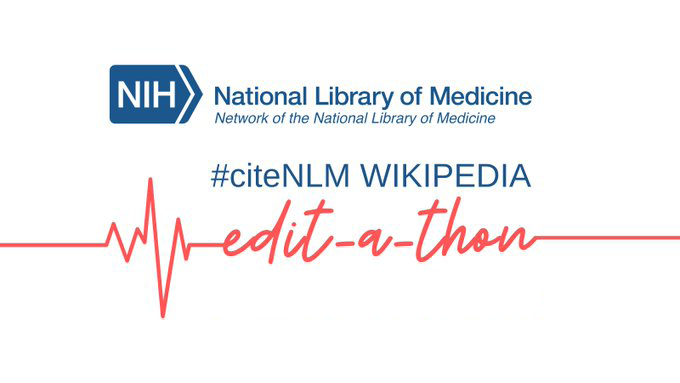 On Friday, March 12, nine HSLS librarians took part in a Wikipedia edit-a-thon as part of the Spring 2021 #CiteNLM campaign, for which the focus was on articles related to “Healthy Aging.” If you are not familiar with the concept of an “edit-a-thon,” it is simply an event in which people come together—virtually, in the case of the HSLS edit-a-thon—to edit Wikipedia articles. During HSLS’s two-hour edit-a-thon, librarians edited nine articles, with a net addition of 801 words and 14 references. In the first week after the HSLS edit-a-thon, those nine articles were viewed more than 26,000 times. One article alone received over 10,000 views in the following week. That fact that these articles were viewed so many times in such a short period demonstrates the value of improving the health information available on Wikipedia.

Anyone interested in learning more about editing Wikipedia can find guides and tutorials for getting started on Wikipedia’s “Getting Started” help page. For more information on health and medicine articles on Wikipedia, go to the project page for WikiProject Medicine.

If you are an instructor who is interested in incorporating Wikipedia into a course or project and would like librarian assistance, please contact us via Ask a Librarian.