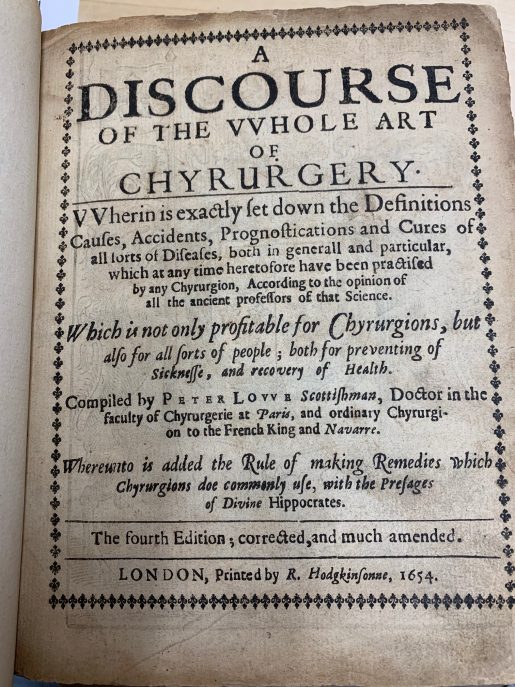 Peter Lowe, author of A Discourse of the Whole Art of Chirurgery published in London in 1654, left a significant mark on Scottish medicine by founding the Faculty of Physicians and Surgeons in Glasgow, reorganizing the practice of medicine in the same city, and then writing a book that made quite a stir. Contrary to the dominating trend at that time to write scientific books in Latin, this book was written in the vernacular and enjoyed great popularity (four editions in the 17th century). However, even more than its importance to 17th century medicine, are the provenance notes added in the 19th century that make the volume in Falk Library’s rare book collection special and unique.

Sir John Eric Erichsen (1818-1896) was a surgeon to Queen Victoria, professor at the University College Hospital and author of the classic book, The Art and Science of Surgery (1853). Marcus Beck (1843-1893) was also a professor of surgery at the University College Hospital. He was an early proponent of germ theory, a house surgeon, and close associate of Erichsen. Herbert West Seager (1848-1926) was a member of the Royal College of Surgeons, author of medical books and a physician at Hampton Court, a Victorian royal palace. Each of these doctors held Falk Library’s copy of A Discourse of the Whole Art of Chirurgery in their hands at some point in time and left their marks to prove it.

The evidence left in the book shows that Marcus Beck acquired the copy in 1875. He marked his ownership by signing his name on the page preceding the title page and dating it. The comparison of his handwriting with the signatures from his other known letters confirms that Falk Library’s copy bears his authentic autograph. Beck’s ownership mark is accompanied by another handwritten note, “In memoriam of [Marcus Beck] John Eric Erichsen 1893,” in the hand of his mentor and associate. This suggests that upon Beck’s passing, the book ended up in the hands of Erichsen, who added the note commemorating his colleague’s passing. Sir John, though older than Beck, outlived him by three years. He died in 1896. 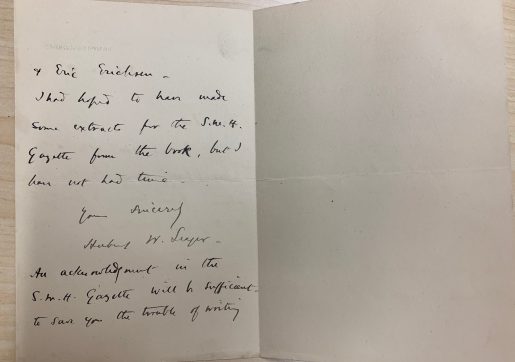 It is not certain how the book came into Seager’s possession. Was it by a professional tie or a “royal” link? Sir John was the surgeon to Queen Victoria and Seager was the physician to Hampton Court, one of the royal properties. Herbert W. Seager had the copy of A Discourse of the Whole Art of Chirurgery after Sir John died. He recognized that the presence of the autographs was valuable and that it made this volume a perfect memorial to two well-known men, and therefore, was worth preserving in a library. He donated the book to St. Mary’s Hospital Library in London. There are two handwritten letters from Herbert W. Seager tucked in between pages of the book. Both letters are dated 1897. In January, Seager describes the book and offers it to the hospital library, which was an interesting choice. St. Mary’s Hospital was founded in 1848 and was one of the earliest teaching hospitals, with its own medical school, library, and periodical. Seager was a frequent contributor to the hospital’s publication. The letter from October, sent together with the book, suggests a public acknowledgement of receipt in the S.M.H. Gazette in lieu of personal confirmation by correspondence.

A short note published in the December 1897 issue of St. Mary’s Hospital Gazette confirmed donation of Lowe’s book to the institution.

How long the book stayed in that library’s collection and how it crossed the ocean to America are questions for another day of sleuthing!