In 1865, Gregor Mendel published groundbreaking findings on plant genetics, which went largely unnoticed for 34 years. With Mendel as his poster child, Anthony Van Raan repurposed the term “Sleeping Beauty” (SB) for work that lies dormant for years before being “awakened” to scholarly attention.1 He defined three SB variables: depth of sleep (maximum of two citations per year); length of sleep (duration of limited citation period); and awake intensity (annual number of citations during the four years following awakening). 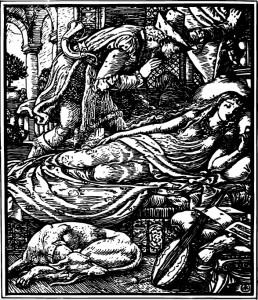 No Sleeping Beauty itself, Van Raan’s 2004 paper has been cited in bibliometric analyses of everything from ophthalmology to Italian economists. Some equate SBs with classic or highly-cited papers. Others examine the dynamics of the fairy tale relationship, revealing that the impact factor of the prince’s journal averages twice that of the SB. In the ideal couple, the awakening kiss is followed by a robust citation career for both parties. In unhappier cases, one lover dominates, sometimes to the point where the other party receives only co-citations.2

SBs in physics, chemistry, and other sciences receive particular attention, but SBs occur across the sciences and social sciences. Take statistics. A 1901 article by Karl Pearson slept for over 100 years. Statistical techniques such as the Wilson score interval, Fisher’s exact test, Metropolis-Hastings algorithm, and Kendall rank correlation coefficient all originated in SBs.3

What attracts the kiss? Einstein et al.’s so-called paradox paper received an initial burst of attention, then languished for nearly 60 years. This hypothetical experiment became newly relevant once physicists had the technology and theoretical tools to observe quantum interactions.4

Accessing the journal literature through enormous multidisciplinary databases such as Web of Science may facilitate another scenario: the cross-disciplinary kiss. After 46 years, medical researchers awoke Turkevich et al.’s paper on liquid suspension of gold particles from its slumber in the chemistry literature. Now gold nanoparticles are used to find tumors and deliver drugs.4

According to some measures, SBs are not necessarily rare.3 Given the continuing expansion of the journal literature, there is a wealth of potential SBs and princes out there. Perhaps SB content and characteristics can be mined to identify sleeping innovations.5 And the SB phenomenon adds perspective to our intense interest in citation counts, encouraging us to take the long view.