During the second half of the 17th century the Dutch East India Company (the Verenigde Oostindische Compagnie), known as VOC, managed to monopolize trade with Asia. It was a new kind of corporation: an aggressive commercial firm which became a profit-making, semi-independent arm of the Dutch state. Its trading post on the island of Deshima was the only window to Japan, otherwise inaccessible for foreigners after the Tokugawa government adopted a national seclusion policy.

Despite the restrictions of a “closed country” some Japanese were still interested in European knowledge, especially medicine and astronomy. The VOC physicians were an excellent source of knowledge for interpreters who continued to work on translating medical books from Europe. In 1673, per the official shogun’s request to bring a physician with botanical and chemical experience,¹ VOC hired Willem ten Rhijne, a young physician educated in Angers and Leyden. As soon as he arrived in Japan he was subjected to many long interviews exploiting his knowledge of western medicine. Ten Rhijne, in return, used contacts with interpreters to inquire about the Japanese practice of acupuncture and moxibustion (fire acupuncture) and, with their help, to learn more on the subject from Chinese texts available to him on Deshima. The result was his book Dissertatio de Arthritide (London 1683), including among others, a very important treatise on acupuncture. The text portrayed Japanese practitioners with admiration for using this therapy to treat diseases in place of the detested European practice of bloodletting.² One may question the accuracy 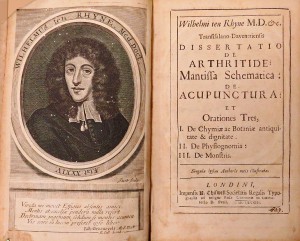 of the final transfer of knowledge taken from a Chinese text and translated to Japanese, then to Dutch, and finally rendered in Latin as “De Acupunctura,” but there is no question that for Europeans it was the first detailed account of acupuncture practice. The treatise is illustrated with two Japanese and two Chinese schematics of meridian points, as well as images of the moxa (mugwort) and an acupuncture needle.

The library’s copy of Dissertatio de Arthritide is a variation of the original edition with a single place of publication. It includes all six plates and a frontispiece portrait of the author sometimes missing from other copies. It belonged to Caspar Wistar Pennock (1799-1867), a physician from Philadelphia. It was later acquired by Gerald Rodnan, and eventually donated to the library by his heirs. It can be viewed in the Rare Book Room by appointment. 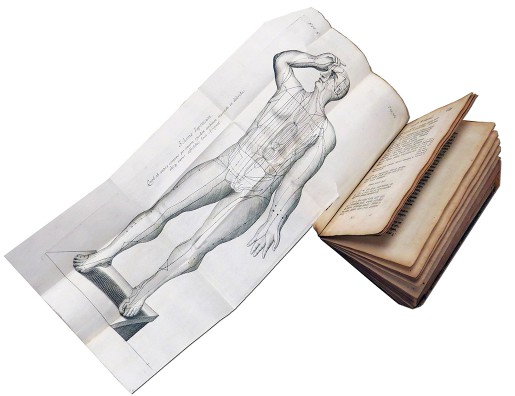