The oldest book in any of the HSLS collections is Expositio in primam fen quarti Canonis Avicennae De febribus, Giovanni Arcolani‘s commentary on fevers in the first fen [section] of book four of Avicenna’s Canon. It was printed in Venice in 1496 by Bonetus Locatellus, one of the most prominent Venetian publishers, whose monogram appears on the last page. The book contains many examples of marginalia, hand written notes by scholars studying Arcolani’s text, and includes drawings of a small hand pointing to important passages. It also has fine wooden capitals [decorated initial letters]. The book was rebound on Gregorian chant parchment. When it was rebound, the pages were cut in the process so there is a minimal loss of marginalia in the HSLS copy. 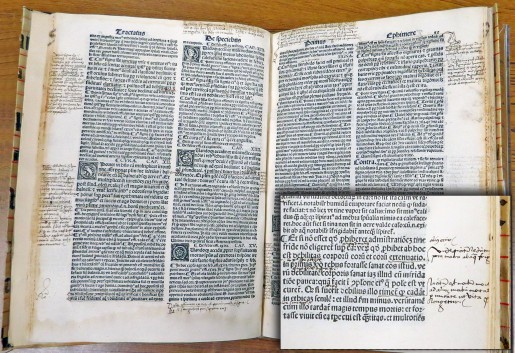 The author, Giovanni Arcolani (approximately 1390-1484) of Verona, was a professor of medicine and surgery at Bologna. Thanks to his Practica (Practice of Surgery) which contains a description of the filling of cavities with gold leaf and engravings of instruments used, he is considered one of the pioneers of oral surgery. His teachings and writings were based on Arab writers, in particular Avicenna, who was considered an authority in European medicine from the 14th to the 16th centuries.

Avicenna’s main work, Canon, was used by medical scholars during the 13th century and in university courses during the 14th century, when commentaries providing the groundwork for interpretation first became available. Commentaries written by university professors were widely used in lectures and as textbooks. They are not comprehensive (no Latin commentary on the entire work is known to exist), but deal with several parts or sections of the Canon as Arcolani’s example illustrates. However, since these explanatory writings were often amplified with the personal observations and experiences of their authors, they provide interesting evidence of the ways in which the Canon stimulated new developments in Western medicine.1

1. U. Weisser, “Avicenna XIII. The Influence of Avicenna on Medical Studies in the West,”  Encyclopaedia Iranica, online edition, 2014, available at http://www.iranicaonline.org/articles/avicenna-xiii.