Missy Harvey, academic liaison for the National Network of Libraries of Medicine, Middle Atlantic Region (NN/LM MAR), has worked in academic libraries for 30 years and is familiar with the challenges faced in college and university libraries.

In 2012, NN/LM identified the need to enhance outreach to community college librarians. These librarians serve an important role in the training and development of students in the allied health professions. A nationwide task force was created. Interviews were conducted to learn more about this target population. Strategies were then developed to address outreach to community college librarians. Harvey served as MAR’s representative on this task force and is now responsible for executing outreach initiatives for librarians in the region.

The task force learned several interesting lessons. For instance, most colleges referred to collaborations with nursing departments. Some librarians, but not all, use PubMed and MedlinePlus, as well as CINAHL. Other lessons included:

Task force members compiled the following characteristics about this group of librarians:

As the academic liaison for the Middle Atlantic Region, Harvey has been actively working to develop an outreach program to community college librarians:

Harvey developed a new LibGuide in September 2013, pulling together key resources to meet the needs of these librarians. She has received a great deal of positive feedback about the LibGuide, with many librarians choosing to add it to their library’s Web site or LibGuide. In fact, in less than two months, the LibGuide has consistently ranked in the top five highest visits for all NN/LM LibGuides nationwide (FYI, the most visited LibGuides are related to the Affordable Care Act). 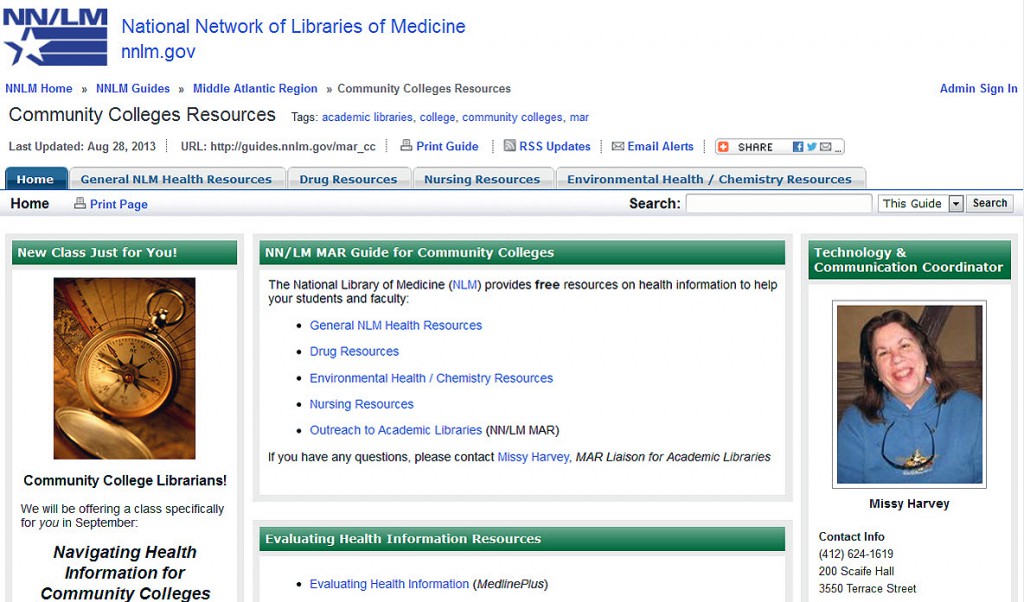 Harvey developed a new webinar to target community college librarians. This free webinar was offered online for librarians working with students in allied health fields. The 1.5 hour class enabled these librarians to learn more about how their students can research health literature using PubMed and MedlinePlus, find quality information for patients and consumers, learn about other NLM databases of interest to their faculty and students, as well as learn about other classes and services available from NN/LM, if they become members.

Harvey offered two sessions in September and more than 100 librarians nationwide participated. Librarians are interested in more classes, so she will be offering sessions toward the end of fall, as well as in spring 2014.

For the future, Harvey intends to follow the strategy she used to focus on community college librarians, expanding her outreach efforts to target librarians in colleges and universities who do not have a medical school and are not NN/LM members.