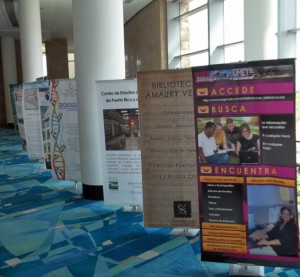 The International Federation of Library Associations and Institutions (IFLA) held its annual conference in San Juan, Puerto Rico this past August. This international conference brings together over 3,500 participants from more than 120 countries. I was fortunate to have been accepted to present at a preconference session hosted by the Section of Health and Biosciences Libraries. Librarians and library educators from Australia, Canada, Ireland, Puerto Rico and the U.S. also presented at this session. My presentation, “The Development of a Post-Masters Online Curriculum in Health Sciences Librarianship,” described the HealthCAS online post-Master’s degree program, a joint project between HSLS and the University’s School of Information Sciences.

IFLA had the look and feel of any other library conference I had attended in the U.S. It was held in a large convention center, there were plenary speakers, individual and poster sessions and vendor exhibits. Unlike other conferences, the attendees were from all over the world and spoke many different languages. Every session was translated into seven different languages. When I entered a session, I could exchange my badge for a headphone which would allow me to listen to sessions in other languages. My IFLA conference badge stated that I was from the United States, unlike other conferences which normally would have noted that I was from the University of Pittsburgh. The larger sessions had speakers presenting about global issues. For example, a speaker from the World Intellectual Property Organization (WIPO), an agency of the United Nations, spoke about developing international 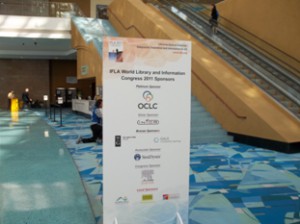 While meeting librarians from many countries around the world, I learned that they are experiencing the same challenges and concerns as those of us at HSLS. These include struggling with budget constraints, open access issues, and how best to provide information to our users to name just a few.