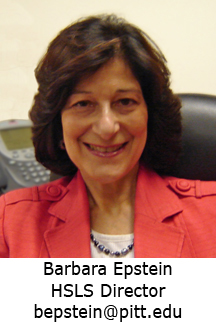 Elsewhere in this newsletter, you will learn of HSLS’ new role as the Regional Medical Library (RML) for the Middle Atlantic Region of the National Network of Libraries of Medicine (NN/LM MAR), which includes New York, New Jersey, Pennsylvania and Delaware. Competing for this five-year contract has been a yearlong journey of researching and developing plans for programs and services, gaining support from network members in our region, hosting a site visit by the review team, and responding to several rounds of questions and clarifications for both the technical and business proposals. This has truly been a community effort with participation and support from HSLS staff members and librarians, Pitt’s Office of Research, the Senior Vice Chancellor’s office, and health sciences faculty and deans who participated in the site visit and wrote letters of support. We also received support letters from librarians throughout the region, and commitments from nearly 30 academic health sciences libraries to serve as MAR resource libraries.

In mid-April, we received the happy news that our proposal was successful, and—almost before we could catch our breath—the contract period began on May 1. Renae Barger was quickly appointed as the MAR Executive Director, and she has been working non-stop to transfer ongoing services from the previous RML in New York and to recruit her staff of four librarian-coordinators and an administrator. The MAR offices are in temporary space in Falk Library until permanent offices are constructed on the mezzanine floor.

At the recent annual meeting of the Medical Library Association in Minneapolis, Renae and I met with MAR member librarians to introduce HSLS as the RML and to outline our plans for the five-year contract. We also attended a daylong meeting of the staff and leadership of all eight NN/LM regions and NLM’s National Network Office, where we were welcomed warmly and received a great deal of helpful advice and information.

Serving as the Regional Medical Library to lead the NN/LM Middle Atlantic Region is a new role for HSLS, but one that is a logical extension of our previous outreach activities. We are excited about building this program and are grateful for the opportunity to work with libraries and health professionals throughout the region to advance the NN/LM mission to equalize and enhance access to health sciences information.